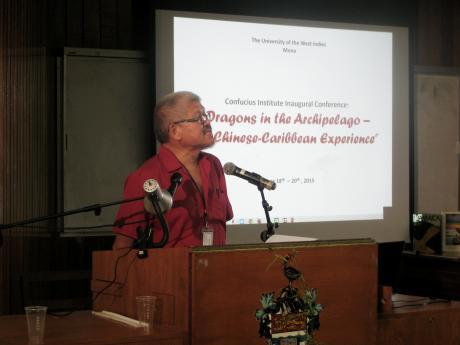 File
The late Dr Victor Chang during a presentation at the University of the West Indies, Mona campus in 2015.

Former lecturer in the Department of Literatures in English at the University of the West Indies, Dr Victor Chang, has died.

Chang died on Friday morning. He was ailing for some time.

Chang’s academic career is characterised by his involvement with the wider community and beyond, having served as a visiting lecturer at the University of Hull, England in 1981, carried out assignments with the Ministry of Education and Jamaica Festival.

The noted academic was a contributor to the National Association for Teachers of English Workshops for some 20 years and was assistant chief examiner in English Literature with the Caribbean Examinations Council from 1987-1992.

He has also been credited with giving record service to the West Indian Association for Commonwealth Language and Literature Studies (WIACLALS), serving as chairman from 1994-2006, as secretary and treasurer from 2007-2009, and as secretary from 1981-1992, in total 25 years.