Shawn Lyons determined to be an ambassador for the deaf 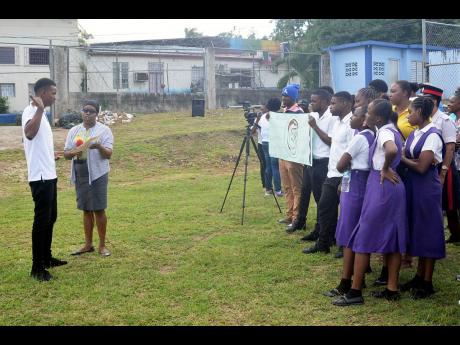 Contributed
Shawn Lyons (left), a deaf student of the Caribbean Christian Centre for the Deaf in Granville, St James, communicates with other students and residents through sign language as his teacher, Vanessa Thomas, translates. They were participating in the Sam Sharpe Diagnostic and Early Intervention Centre’s recent staging of its Disabilities Awareness March and Expo 2019 in Granville on December 6, held in observance of Disabilities Awareness Week under the theme ‘I Have a Voice, Include Me’.

Eighteen-year-old Shawn Lyons, a dance enthusiast and a student of the Caribbean Christian Centre for the Deaf in Granville, St James, is determined to show that deaf people can be worthwhile contributors to Jamaica’s workforce, despite having lost his hearing at three years old.

Lyons, who resides in Granville and is currently enrolled at the HEART Trust/NTA to pursue housekeeping, shared his story through sign language, as his teacher, Vanessa Thomas, translated during the Sam Sharpe Diagnostic and Early Intervention Centre’s recent staging of its Disabilities Awareness March and Expo 2019 in the community.

The event was held in observance of Disabilities Awareness Week under the theme ‘I Have a Voice, Include Me’, in partnership with the Caribbean Christian Centre for the Deaf and the HEART Trust/NTA.

“I have experienced obstacles in my life as a deaf person. I lost my hearing after I had a fever at the age of three, and the doctor tested me and they confirmed that I was deaf,” Lyons told the participants during the expo.

“My family was a little worried, but my mother could understand me a little, and she transferred me into St Ann, to St Christopher’s School for the Deaf in Brown’s Town.”

St Christopher’s School, which received new classroom facilities and infrastructural upgrades valued at $12 million from the Sagicor Foundation and Food For The Poor in June this year, was opened in 1919 as the first school for deaf students in Jamaica and is one of the schools overseen by the Jamaica Association for the Deaf (JAD). The funding for the new buildings and repair work was provided through proceeds from the 2018 Sagicor Sigma Corporate Run.

The school, which caters to students from ages three to 12, gave young Lyons a voice through sign language when he enrolled there in 2006. While attending school, he saw that there were other people like himself, who could interact with one another despite being hearing-impaired.

“I saw many deaf students and staff there at St Christopher’s. I learned to use sign language from the staff, I fellowshipped with them, and my signing began to improve,” said Lyons.

After leaving St Christopher’s School in 2014, he attended the Lister Mair-Gilby High School for the Deaf in Papine, St Andrew, which is another institution managed by the JAD. During his three-year tenure at this school, he discovered another avenue of expression through dancing.

“I went into Lister Mair-Gilby High School, and I started to learn a lot about dance, and I love to dance. I also learned about the various obstacles faced by deaf people, and I prepared myself to embrace my deafness through dance, and to overcome obstacles that would prevent me from being successful,” Lyons explained.

“Many hearing people (those who are not deaf) thought I could not dance, but I proved them wrong. When I danced, the hearing persons were shocked. It was the first time they were seeing that, but I knew I could do it,” Lyons added confidently. “Dance is my passion, and in the future, I want to enrol in the Edna Manley College in Kingston to pursue my dance degree.”

Lyons’ courage, in spite of his deafness, makes him an exception based on a report published by the JAD in November, which stated that deaf and hard-of-hearing children are being kept out of specialised institutions by their parents.

According to the JAD’s 2017 to 2019 report, enrolment across its schools has dropped from 284 during the 2015-2016 school year to 247 in the current academic year. Because of the lack of enrolment, one of those schools, the Maranatha School for the Deaf in Top Hill, St Elizabeth, has had to close its doors.

However, for Lyons, it is his goal to prove that deaf people are just as capable of contributing to the growth of society as anyone else.

“There are many deaf people in the world who are successful, and they have goals and visions. Some have their own businesses, and some are chief executive officers, managers, teachers, maintenance persons, principals, artistes, and chefs; and there is so much more that the deaf can do.”