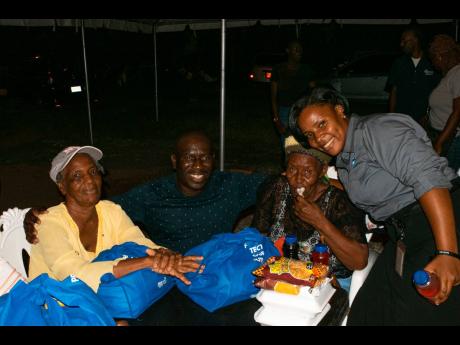 The Insurance Company of the West Indies (ICWI) and District Constable Troy Lewis of the Port Royal Police Division joined forces to bring much-needed meals and grocery items to senior citizens of the Bull Bay area during a Christmas treat held on December 18 at the Bull Bay Police Station.

The annual treat, the brainchild of Lewis, began in 2007 on his assignment to the Bull Bay Police division. Some 12 years later, even after being reassigned to the Port Royal Division in 2012, the devout district constable continues to build on his relationships with the Bull Bay police and corporate Jamaica to bring the senior citizens of Bull Bay much cheer and goodwill each Christmas.

According to chairperson of the ICWI Foundation, Valerie Reynolds, “We have been on board with Troy since day one. What he is doing is good, and we at ICWI are always more than willing to be part of ventures that benefit communities. We lend our support each year by making a donation towards the purchase of grocery items for the golden agers and shut-ins in the Bull Bay area.”

Speaking to the significance of this year’s staging, the police officer noted that he was grateful that team members of the ICWI had visited to assist with the treat. “We must thank ICWI for believing in this treat from the start. They were also here to help us share meals, talk to our seniors, entertain them, and serve them. So ICWI’s involvement was very helpful, and the senior citizens were so happy to have them because they interacted very well with them, especially when singing with them,” he shared.

A passionate Lewis also commented on the importance of maintaining good relations between the police and community. “This is community involvement. With this project and many others, you will see where the police are going out into the communities. Youths, especially, are gravitating to the police. They appreciate what the police are doing, and the police, as well, appreciate the collaboration with them. We don’t want it to only be that when there is a dispute or war that you see the police,” admitted Lewis.

During his final address to the grateful grouping, Lewis, the unsung hero, said, “Try to make what you have in those grocery bags last you. I want to know that when I am eating my Christmas dinner, you are eating, too. I can’t feel good if I eat and you have nothing.”

Lewis and the team from the Bull Bay Police Station also visited shut-ins in the vicinity to make special deliveries of the Christmas grocery items.

The ICWI Foundation has pledged its long-term assistance to the initiative, saying that it is in full endorsement of legitimate projects such as this one, initiated by Lewis.