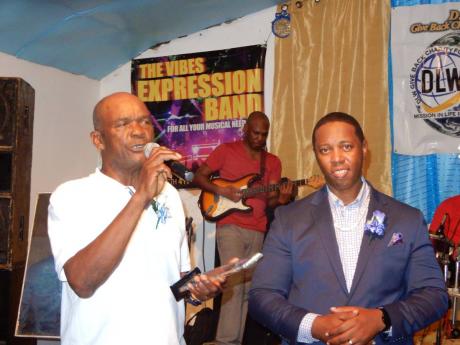 The DWL Foundation on Thursday night continued its tradition of honouring volunteers and community workers in the district of Bellevue, St Elizabeth.

Among the three recognised for going above and beyond the call of duty in service to the community was Errol Hill, who, in a moving speech, said none of the heroes knew they were one before they died.

“But tonight, I am here to celebrate this recognition, although if I had any idea that this was going to happen, I would have gone somewhere else,” he said to laughter.

Hill, who already received the ‘community award’ a few years ago, did not let up in service and was available to serve in whatever area that was needed, moved up to the highest award category.

“I had a heart attack in 1994, then some years later I had a stroke … but as long as there is breath in my body, my life will still be in service to this community. I know no other way,” he told The Gleaner.

Gurvan Whitely, who, along with his sister Apostle Bernadine Holness, started the foundation and annual concert and awards in memory of their late mother, Doris Whitely, said their mother epitomised the meaning of charity.

Whitely, who is now hosting the event for the sixth year, said it can be challenging financially, but he keeps at it as a way of saying thanks to those who have been involved in the community’s affairs without asking back for anything.

“These are persons who you might never hear their names called when the civic awards or awards at King’s House are given out. They serve without expecting anything in their own ordinary ways, they are heroes. They may not get their thanks on the big stage … but at least here in their community, they can be recognised for what they are doing,” said Whitely.

He said the community stalwart awards are given to those who are involved in assisting the schools, seniors, mentoring children or just there for whatever assistance that is needed.

The Heroes Award, said Whitely, goes to those who were already honoured yet they continue to serve, even stepping up their activities in service.

For the last six years, over 132 community persons and 18 heroes were honoured.

The stalwarts and heroes were honoured at a gospel concert held at the Mount Zion Church of Christ the Redeemed Church, the church his mother started.