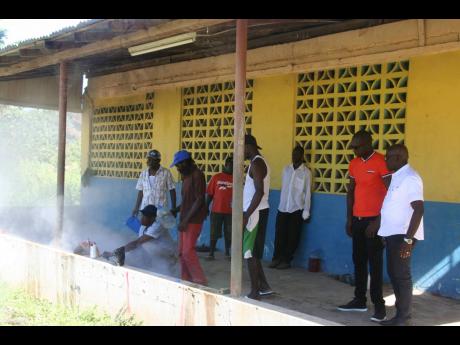 Marvell Sewell, councillor for the Green Island division in the Hanover Municipal Corporation (HMC), has embarked on a project to refurbish several community centres and playing fields, starting with J$7 million of refurbishing and improvement work on the Santoy Community Centre and playing field.

Sewell highlighted the project while speaking with The Gleaner about his plans for community development in the Green Island division, with sports being a key element of his objectives.

“My philosophy is to unite people, and I think sports and entertainment is the surest way of achieving that goal,” said Sewell.

“I have eight major communities in the Green Island division, and my dream is to have a proper playing field and meeting facility in each one of these communities.”

The planned work to be done at Santoy includes the establishment of a computer centre, a homework centre, a meeting room, a kitchen and bathroom facilities at the community centre. In addition, the playing field will be resurfaced and fenced, and a multipurpose court will also be built.

In recent months, several communities in Green Island have come under close scrutiny from the Hanover police due to acts of crime and violence. However, Sewell said he believed that greater interaction and better socialisation between community members through sports would help the security forces remedy the situation.

“We know about sports and entertainment when it comes to Jamaica, and remember that in 1998 when Jamaica qualified for the World Cup, on that single day not even one murder was recorded in this country because of the mood of the people,” Sewell said.

In the meantime, Lucea Mayor Sheridan Samuels, the chairman of the HMC, said Sewell’s ambitious project would have the corporation’s full support.

“To really take up such a project like that, the councillor (Sewell) is really a brave man. But we at the corporation intend to help him all the way,” said Samuels. “Sports and other recreational activities is really a vehicle that can help in curbing the crime within the country and this community in particular.”