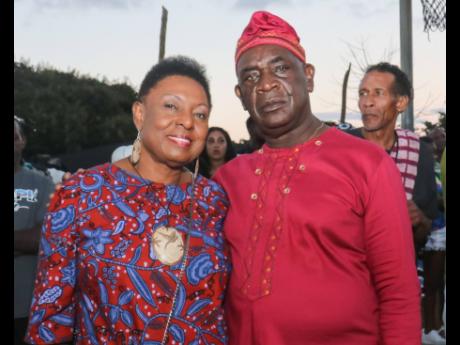 Ashley Anguin
Olivia Grange, minister of culture, gender, entertainment and sport, with Maroon chief Colonel Ferrol Williams of the Accompong Town Maroons, during the 282nd anniversary of the signing of the peace treaty between the Maroons and the British in Accompong, St Elizabeth. 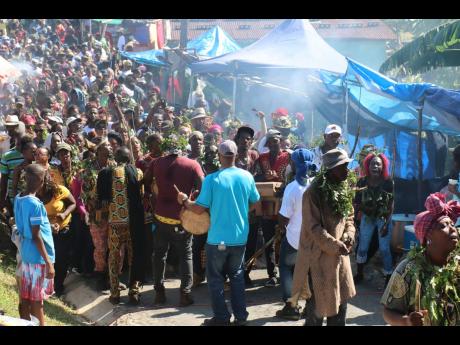 Maroon Colonel Rodolph Pink of the Scott’s Hall Maroon Town in St Mary wants the State to ratify the sovereignty their ancestors fought for and won from the British 282 years ago as part of the Maroon Peace Treaty with the British government.

Pink said that despite being armed with the peace treaty between the Maroons and the British, Maroons still do not have autonomy over their lands and villages in the way they should, as outlined in the treaty.

“We say we are sovereign, but the treaty has not been ratified by Jamaica until now,” Pink said Monday at the 282th-anniversary of the signing of the peace treaty in Accompong, St Elizabeth.

The treaties, like many other aspects of indigenous and traditional culture and peoples, are seen by many as relics of the past – good for folklore and tourism, but not legally enforceable.

However, ever since their signing, the treaties have been respected and relied upon continuously by the Maroons and their descendants as a basis for the definition of the relationship between Maroons and the Government of Jamaica, and the apportioning of mutual rights and responsibilities between the respective parties.

“We also need the Jamaican Government to ratify the treaty. It has been signed by the British, and Maroons are still fighting for their sovereignty,” Pink said to loud cheers from the gathering of Maroons who had come from their settlements across Jamaica and from Suriname to celebrate Captain Kojo’s birthday.

Pink said the lengthy delays and failure of the Jamaican Government to ratify the Maroon treaty has left them exposed to the mercy of the Jamaican security forces to arrest Maroons in their villages at will and rule against their freedom.

“Last month, I went to court in Kingston and a [parish] judge look at me and tell me that they have rights to arrest Maroons from the Maroon villages. Nothing should go like that, we need to rectify every single thing of the Maroons,” he said.

Speaking with The Gleaner in Accompong Town on Monday, Olivia Grange, the minister of culture, gender, entertainment and sport, laid blame for the delays in ratifying the historic and important Maroon Treaty at the feet of the political administrations of both the Jamaica Labour Party and Peoples’ National Party since Independence in 1962.