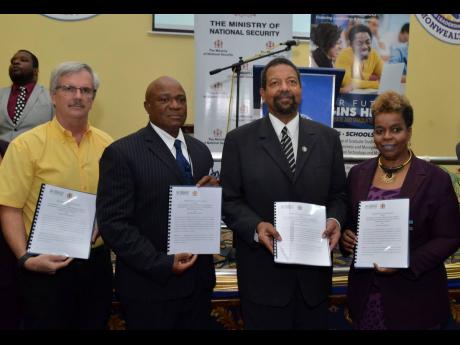 Kenyon Hemans
Professor Dennis Gayle (second right), university president/executive chancellor and University of the Commonwealth Caribbean (UCC) Foundation board chairman, with Dianne McIntosh, permanent secretary in the Ministry of National Security; Lt Col (retired) Gary Rowe (second left), commissioner of corrections; and André Schwab, director of Stand Up for Jamaica, at the signing ceremony for a memorandum of understanding between the ministry and the UCC at the college campus in St Andrew on Monday. 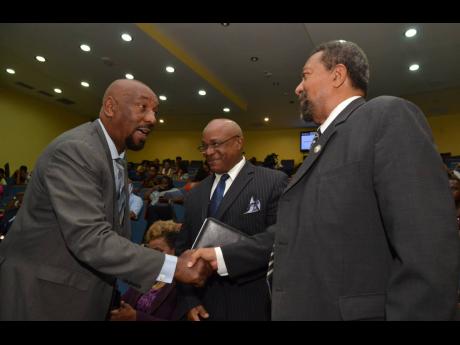 The University of the Commonwealth Caribbean (UCC) on Monday signed a first-of-its-kind memorandum of understanding (MOU) with the Department of Correctional Services within the Ministry of National Security and non-profit organisation Stand Up for Jamaica to undergird plans to offer four inmates scholarships to pursue associate science degrees in business administration.

The pilot initiative has been hailed as a breathtaking “first step” in the effort to “fully rehabilitate” inmates at the St Catherine Adult Correctional Centre, located in Spanish Town.

Under the MOU, each inmate and one correctional officer will receive a scholarship valued at $300,000 to pursue, over two years, associate degrees, starting this semester.

“This programme is the first for them at the St Catherine facility, but we had teachers, we had programmes through HEART-NTA and they get counsellors going to them offering service also, but this is unique,” said Stand Up for Jamaica director André Schwab.

“It is the first time that a university in Jamaica has backed such a programme, and should this becomes a success then whatever the UCC can offer within their list of programmes to add to this moving forward would be welcomed,” he said.

At Monday’s signing, the UCC executive vice-president for academic affairs, Professor Bernadette Warner, explained how the MOU was given life.

She said that the agreement emerged out of a conversation she had back in September 2019 with UCC executives, Stand Up for Jamaica director Carla Gullotta, and board member Orlando Robinson.

“This meeting was prompted by an inquiry from an adjunct lecturer at the UCC’s May Pen campus, who wondered whether the university could facilitate the pursuits of degree programmes for qualified correctional centre inmates,” said Warner.

“The vision is to build this scholarship programme to include more eligible inmates and other correctional facilities in due course,” Warner added.

The Department of Correctional Services will provide the ‘students’ with appropriately equipped lab books, materials and student support services in collaboration with Stand Up for Jamaica and will meet the cost of non-tuition fees, apart from each student’s application and miscellaneous fees, which will also be addressed by the UCC.

Minister of State in the Ministry of National Security Rudyard Spencer said the signing seeks to enhance the rehabilitation process and facilitate the successful development of inmates and correctional officers.

He said the initiative will not only benefit the families of the men who are identified to participate, but will also represent a sensible investment for the society.

“Simply locking up people and throwing away the keys is no longer a part of the correctional process. We have shifted gears; our focus is not on punishment but on redemption,” Spencer said.