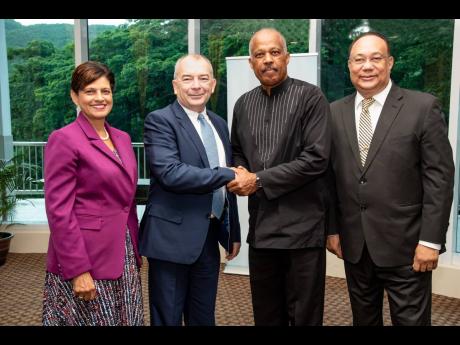 The University of the West Indies (The UWI) and the University of Coventry in England have launched a UWI-Coventry Institute for Industry-Academic Partnership, dedicated to the promotion of an innovation and entrepreneurial ecosystem across the Caribbean region.

The new institute is expected to complement The UWI’s leadership role in promoting innovation as a key driver of economic growth. It is also aimed at supporting the university’s quest to become more entrepreneurial by fostering and increasing partnerships between The UWI and industry, among other strategies.

In a release, the university said the institute would aid the enhancement of international competitiveness in the Caribbean private sector through research and economic partnerships.

“It follows consultations by The UWI with the private sector in a range of areas including research and innovation, entrepreneurship and commercialisation, and university and industry collaboration,” the release read.

Speaking at the launch of the Institute at The UWI Regional Headquarters last month, Professor Sir Hilary Beckles, vice-chancellor of The UWI, said the tertiary institution was committed to “demystifying how academia and entrepreneurship can intersect to achieve the economic growth”.

Said Beckles: “One of the challenges across the region, is that we have not achieved any measure of consistent growth. It remains a mystery why this economic growth is eluding us despite entrepreneurial engagement, public policy advancement and macroeconomic stabilisation.”

He said The UWI was putting increased emphasis on strategies which place high priority on entrepreneurial activity, building bonds and bridges between capital and organised knowledge.

Coventry University, Beckles noted, is highly regarded in the area of industry-academic alliances and is a suitable partner “to help The UWI improve its contribution to Caribbean entrepreneurship, industry innovation and professional training for the 21st century global economy”.

Stating that the institute would provide research training at the postgraduate level and host a raft of master’s degrees in the Caribbean, Coventry University’s vice-chancellor, Professor John Latham, said his university, which is consistently rated among the top universities in the world, is pursuing a global agenda which includes “working with sister institutions around the world to come up with new approaches to achieving innovation and entrepreneurial success”.

Dr Graham King of the Faculty of Engineering at The UWI, St Augustine campus, said work was under way in several key areas, including agri-engineering and petroleum-engineering.

Ambassador Dr Richard Bernal, pro-vice-chancellor for global affairs at The UWI, noted that collaborations between the two universities had also already begun with projects such as the establishment of a climate smart zone in Trinidad & Tobago and a technology park in Jamaica.