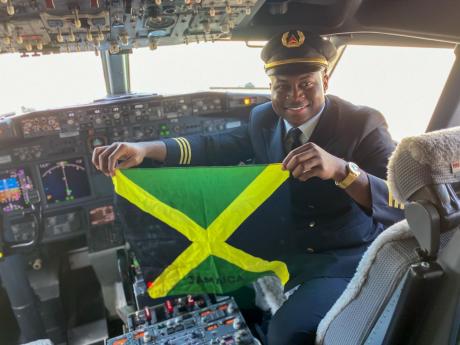 Jamaica-born pilot Marlon Dean Dayes was this morning close to tears as he achieved his lifelong dream of flying a plane back to his homeland.

The 26-year-old could not help but become a bit emotional as he accepted congratulatory hugs and applause from more than 150 Delta Air Line passengers following a successful landing at the Norman Manley International Airport in Kingston.

“It was a nice smooth touch down,” he said of his experience flying the Delta Air Line Boeing 737 aircraft from New York to Kingston for three hours.

“Everybody complimented and you know Jamaicans, they applauded and then coming off, everybody was hugging me up and taking selfies and pictures and even the tourists, they were like ‘good job, I am proud of you for coming back home’,” he told The Gleaner shortly after arriving at the airport where as a little boy he recalls standing in the waving gallery and watching planes land.

The young pilot will be celebrating two years at Delta in a few days and so for him, the experience which he had longed for, could not have come at a better time.

“I’ve waited on this flight for as long as I can remember. Finally, I got the opportunity to fly to my little island. Dreams really do come true,” he tweeted shortly after landing.

Dayes became a pilot at 19 and started flying for a commercial airline in his early 20’s.

The Wolmer's Boys' School and Florida Institute of Technology alumni said his next goal is to fly to the Sangster International Airport in Montego Bay, St James.