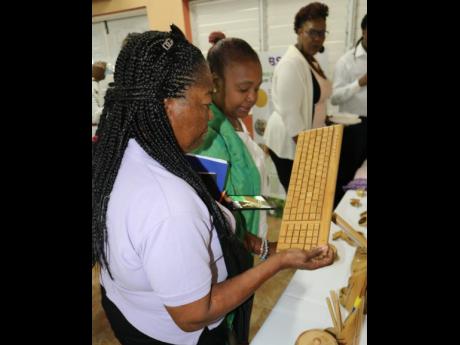 Christopher Serju
Claudia Griffiths takes a close-up look at the computer keyboard made from bamboo on display at yesterday’s seminar on bamboo leaves, while her friend, Audrey Brown, checks out other items.

The Bureau of Standards Jamaica (BSJ) has embarked on a mission to promote bamboo as a replacement material in a number of local industries which, if it takes off, could earn for and save the country millions of dollars in foreign exchange while making a significant contribution to gross domestic product.

Hopeton Heron, executive director of the BSJ, yesterday described bamboo as “protector of earth’s health and wealth” during a seminar on bamboo leaves at the bureau’s multipurpose facility in St Andrew.

In addition to being a pillar of environmental protection, Heron said bamboo has also proven to be material for sustainable development and a vehicle for fast returns on small investments.

The BSJ has led the way in showcasing bamboo as a practical, affordable and flexible building material, having facilitated the establishment of a new factory in White Marl, St Catherine, that produces a variety of furniture and doors. In addition, it is expanding its reach into the construction of bamboo desks and chairs for use by students, to compete with the imported plywood and steel which now dominates.

“This will lead to import substation and the creation of jobs in the future,” the BSJ executive director told his audience.

Heron also disclosed that, in the area of food packaging, the BSJ has been working with Eco Pulp and Paper as well as the Bamboo Industry Association to establish bamboo plates and containers as the product of choice for use by Jamaicans, over plastic.

A number of bamboo products, including an alternative to plyboard, a fully functional computer keyboard, cloth rags, as well as toilet paper and napkins were on display. However, according to Heron, this did not even begin to showcase the full potential of bamboo, which also has been used in the production of baby diapers.

The International Network for Bamboo and Rattan (INBAR) has established, through its various research papers, that bamboo is a cost effective substitute for fossil fuel through its use as activated charcoal for industrial uses and in gas production through gasification due to its higher net caloric value than wood from trees.

“Various innovators and online Jamaica businesses are selling bamboo cosmetics, such as bamboo charcoal facial masks and bamboo charcoal alternatives to toothpaste, and we are presently facilitating one entrepreneur who is seeking to manufacture wine and bamboo juice,” Heron further disclosed.

The seminar, which focused on the use of bamboo leaves in livestock feed, was advised that feeding chickens on an organic diet containing fresh bamboo leaves resulted in them weighing up to 70 per cent more than those fed on standard organic diets. This result, according to INBAR’s Action Research Site, suggests that the fibre in the bamboo leaves enlarges the digestive tract and enables the chickens to consume more and grow faster.