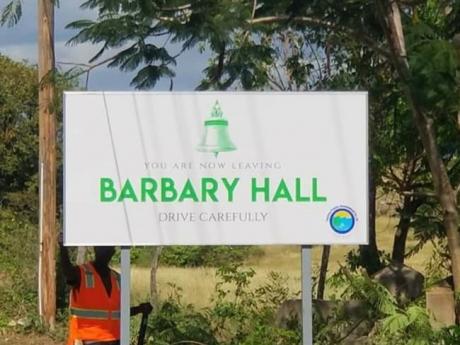 The controversial sign erected in Barbary Hall, St Elizabeth South Western which comprises an image of a green bell, one of the symbols of the Jamaica Labour Party.

The bell is the symbol of the governing Jamaica Labour Party (JLP).

The ‘You are leaving Barbary Hall’ sign was recently erected in the St Elizabeth South Western constituency.

It also bears the logo of the TPDCo.

The Ombudsman wants the TPDCo boss Dr Andrew Spencer to say whether the sign was actually funded by the tourism product company and if so, to provide a picture of the approved design.

Mrs Parchment Brown has also asked whether any political party was involved in the design or erecting of the sign and whether the colour is consistent with others put up by the TPDCo over the past five years.

The Ombudsman in a letter to Spencer has asked that he respond within 24 hours and has copied the correspondence to People’s National Party General Secretary Julian Robinson and his JLP counterpart Dr Horace Chang.

The Tourism Product Development Company (TPDCo) has described as unfortunate the inclusion of a green bell on the community sign it had commissioned in Barbary Hall, St Elizabeth.

TPDCo, in a statement this afternoon, also said the incident is reflective of a gap in execution with its contractor.

"This was quickly remedied within one hour of being displayed and well in advance of calls by the spokesman for its removal," said a TPDCo spokesperson in the statement.