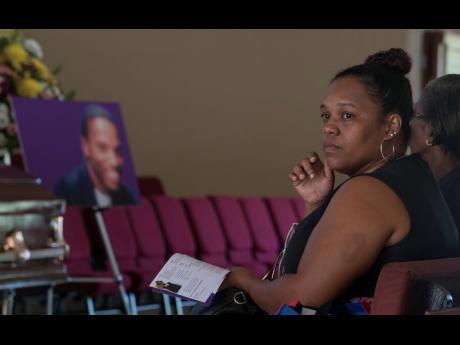 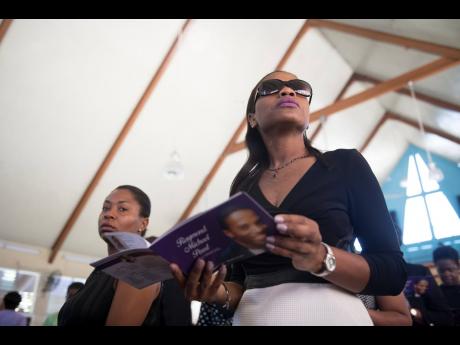 Gladstone Taylor
Monia Allen during the singing of a hymn at the funeral held for DJ Venom at the Boulevard Baptist Church in St Andrew yesterday.
1
2

FAME FM disc jockey DJ Venom was yesterday laid to rest after a funeral at the Boulevard Baptist Church in St Andrew, where his family, friends, neighbours, and members of the RJRGLEANER Communications Group came out in support of the ‘on air’ maestro.

DJ Venom, born Raymond Michael Peart, was remembered for his friendly personality, an unbreakable connection to his hometown of Yallahs, St Thomas, and for his immutable love for his 10-year-old daughter.

“The love of his daughter is something he would proudly share. There was no one who was more important to him. His smile widened at just the mention of her name. He was a true dad who ensured she was cared for,” popular radio personality François St Juste offered in his tribute.

Alongside St Juste, in a show of support from DJ Venom’s work family were the RJRGLEANER Group CEO Gary Allen, and general manager for broadcast, Claire Grant.

Also out in support was the Fortis family. With ushers in purple uniforms, purple-themed programmes and wreaths, and a tribute by Dr Patrick Dallas of the Kingston College Old Boys’ Association, DJ Venom’s alma mater was not to be left out.

With a delivery that filled the halls of Boulevard Baptist, gospel artiste Kevin Downswell offered an impassioned rendition of his newly released single called Carry Me. Other tributes were given by the deceased’s neighbours, Leroy Heron and Audley Simmonds.

Amid the memories of a picture-perfect father-daughter bond and unending allegiance of KC Old Boys, DJ Venom was, of course, also remembered for his turntable mastery.

“You can listen for the entirety of those four hours. Once it involved going on air, Raymond was ready and willing,” St Juste said.

DJ Venom died on November 25 last year when the motorcyle he was riding along the Spanish Town Bypass in St Catherine struck 20-year-old university student, Abigail Rowe. They both sustained multiple injuries and were transported to the Spanish Town Hospital, where they were pronounced dead.