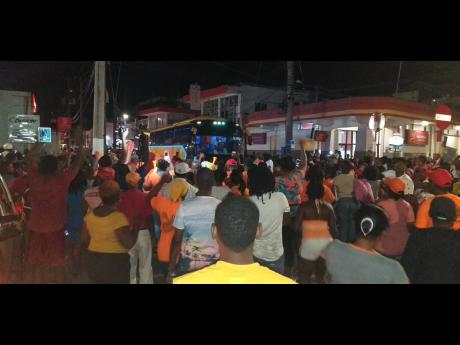 People’s National Party President (PNP) Dr Peter Phillips has chided the Andrew Holness-led administration for rising crime and what he termed poor leadership, promising to be a better steward of the country as he engaged supporters on a bus tour through East Portland last Thursday.

“Yes, we had a vigorous campaign, but nothing divide us to the point weh we caan come together for the benefit of the people of Jamaica,” commented Phillips. “Because one thing all of us know is that the PNP always give better governance, better quality of government for the people of Jamaica than the other people have ever done. When we look at how the 2020 start, it start rough, and the crisis is getting worse and worse. And the pressure on the Jamaican people is mounting higher and higher.”

He blasted the Government for failing to get a grip on the rising crime level.

“When you look at murders this year January, from the first to now, murder gone up to 29 per cent as compared to last year January same time, and there is still no plan, except state of emergency. And even under state of emergency, the police caan even get the food fi keep them through the night. All is happening is so-so chat, but the reality [is], them just caan manage the country,” Phillips said to cheers.

The Government also took some flak for what the PNP president characterised as the mismanagement of state resources.

“You have a minister before the courts and another one get fire; and this year start out like how last year did lef’, which is that the Speaker of the House is trying to cover up and hide the reports of the wrong committed,” he said, commenting on the failure of Speaker Pearnel Charles to allow the tabling of a special auditor general’s report into allegations of malpractice at the Caribbean Maritime University (CMU) last week.

However, last Thursday, Charles promised to table the document at this Tuesday’s sitting of the House of Representatives.

Meanwhile, Phillips said he was pleased with the turnout of party supporters during the bus tour and assured East Portland Comrades that in another two weeks, they would know who is set to run on the party’s ticket in the constituency in the next general election.

It is widely speculated that a clergyman, Bishop Purcell Jackson Jr, is tipped to fill the spot.

When contacted by The Gleaner, Jackson would neither confirm nor deny the claim.

The position of caretaker MP became vacant following a decision by Damion Crawford to step aside some weeks ago. Crawford was defeated by the Jamaica Labour Party’s Ann-Marie Vaz in a hotly contested by-election in April last year.