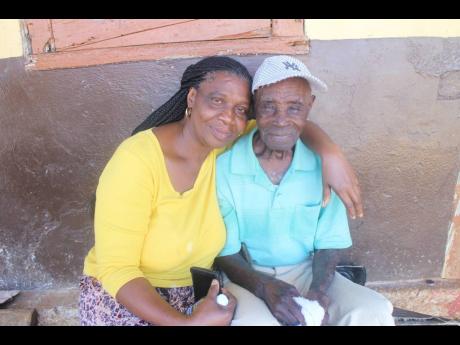 Quite a popular man he is, not just because he is 102 years old, and works his farm as though he is 16, but because he is the oldest man in the community and a father to all.

Egbert Hutchinson has outlived years he never thought he would see, and though he says he isn’t as strong as he used to be, he is showing no signs of slowing down any time soon.

“I am a farmer man, and back in the day I used to do speculation – I go all over and buy animal and come back and sell it. Donkey, cow, pigs, goat – all of them, and me travel all over Jamaica and sell them.”

The father of 10 children, with three now deceased, and two unofficially adopted, Hutchinson said he never got the opportunity to go to school, but learnt the value of hard work from a very tender age.

“Me do everything, man: plant me ground, sell animal and everything. Even my late wife (Ida Hutchinson) used to farm with me too, and she would go to the market to sell.”

His niece, Elaine Thompson, remembers fondly stories of his excursions, and said she has never seen a man at his age work so hard.

“He told me he used to make wattle kitchen. He used to go in the woodland, get the wood and make the kitchen, and he did this as a youngster when he came to live with his grandmother and realised she didn’t have any kitchen.”

According to Hutchinson’s friend, Junior Baker, if he ever stops working, that may be the time his eyes close, as work is the order of his day.

“When this man go the farm, if the river come down him use a long stick to test how deep it is. If he cyan go over it, him walk all the way around the bridge – walk wid him hoe and fork and machete. Right now, the only reason him here right now is because of him sick foot, otherwise from that him down a him farm a plant yam and look buyer.”

Clayton Collins, another friend of Hutchinson, who refers to him as ‘Soldier’, said Hutchinson is an icon in the ­community, and will be for as long as he is alive.

“When I look at this man at his age, still working and being independent, and I look at some young people who are wasting away, not wanting to work …

“Just the other day him buy a new fork and when I asked him about it, he confirmed it and said him tired fi a borrow people things.”

But best believe there is something Hutchinson loves more than his farming, and that is well-cooked pork, and his church.

“Back in the day me used to like go to the dance – me can dance, man – that was my enjoyment. But now me is a churchman. Yes, me love pork too, yam and banana. Me never drink rum, that a nuh my ting.”

Hutchinson recounts his trip to Canada as one of the most interesting ­experiences he has ever had.

“Me love Canada, man. The streets clean: you have man on it a sweep it over 10 time. I was mainly at home, but anywhere them going them (relatives) bring me. Me go to this place like wonderland, and it was just pure music and dancing. Me go on a high tower and me never afraid at all.”

Present at several community events, funerals, grave ­digging and church events to lend his support, Hutchinson said he is just taking each day at a time and basking in the beauty of witnessing each new day with almost perfect health.