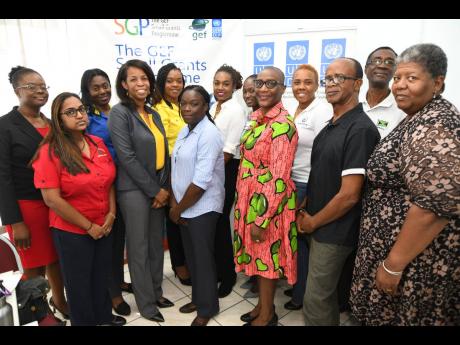 Rudolph Brown/Photographer
Denise Antonio (fifth right), UNDP resident representative for Jamaica; and Gillian Guthrie (fourth left), acting chief technical director of the Policy, Planning and Evaluation Division in the Ministry of Economic Growth and Job Creation, pose with the seven grant beneficiaries who were given a boost to advance environmental protection and resilience among vulnerable communities in Jamaica. The event was held at the Ministry of Economic Growth and Job Creation’s Half-Way Tree Road offices last Tuesday.

She said that since the programme was launched in 2005, the UNDP has enjoyed a strong and valuable partnership with the GEF SGP, which has yielded multiple successive initiatives throughout the country.

“We are pleased to report that due to the high level of diligence and excellence in project execution displayed by our implementing partners and the GEF SGP team headed by Hyacinth Douglas, several community initiatives have gained global renown as best practices, some of which have been replicated at the national and regional levels.

“The UNDP has been privileged over the years to work with the Government on generating resilient solutions that address the impact of challenges such as climate change on economic development, social well-being, poverty and livelihoods, and on achieving the Sustainable Development Goals,” she said. “Since Jamaica’s economic development is so highly dependent on its natural resources, sustaining livelihoods for those who depend on the country’s environmental assets for a living is paramount.”

The UNDP resident representative was addressing a presentation ceremony for seven grant awards to successful applicants in the GEF SGP 2019 second biannual call for proposals, representing a combined commitment of $49.6 million, but with an overall project tab of $109.8 million.

Meanwhile, in addressing the function at the Ministry of Economic Growth and Job Creation’s Half-Way Tree Road office, Deputy Director General of the Planning Institute of Jamaica (PIOJ), Barbara Scott, saluted the GEP SGP for keeping true to its objective to combat the most critical environmental and developmental problems, while enhancing people’s well-being and livelihood.

She applauded the fact that the projects are anchored in the communities and, therefore, depend heavily on the consensus of local citizens, before pointing to some still-outstanding areas of concern.

“Apart from vulnerabilities resulting from climate change and extreme weather conditions, many communities in Jamaica face ongoing problems such as lack of potable water, deforested areas, lack of livelihoods and unaffordable energy costs, which are issues that require urgent and long-term attention.”

Despite these challenges, there can be no denying the significant gains achieved, Scott emphasised.

“Since its inception, the SGP has contributed to the strengthening of target vulnerable communities and groups to respond to climate change and environmental risks. The response has included funding of several projects in the areas of rainwater harvesting, sustainable agriculture, land management and water protection, renewable energy, and biodiversity conservation. All parishes have benefited at one time or other.”