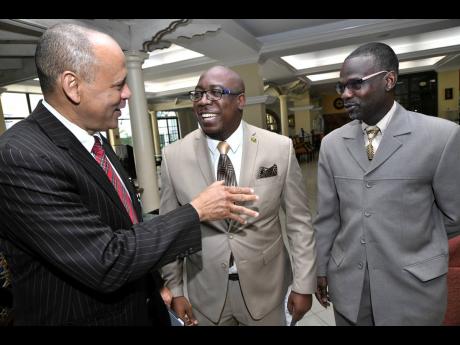 Rudolph Brown/Photographer
Eric Hosin (left), president of Guardian Life, chats with Denzil Thorpe (right), permanent secretary in the Ministry of Culture, Gender, Entertainment And Sport, and Dr Courtney Faulknor, president of the Caribbean Conference of Seventh-day Christians, at a prayer breakfast at The Knutsford Court Hotel on Sunday, January 26. 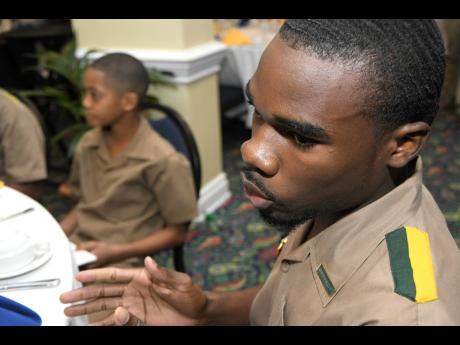 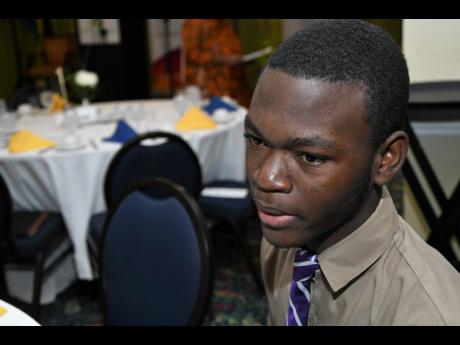 Rudolph Brown/Photographer
Kingston College fifth-former Ahejey Mattis believes some men are weak, which is why they turn to violence to deal with challenges. 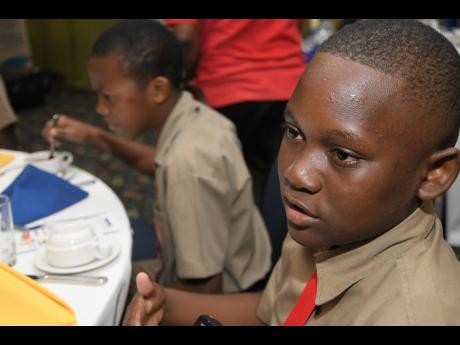 The shocking murder of eight-year-old Galen Buchanan, whose body was found in Kingston with the hands tied behind his back two days after he was reportedly kidnapped late last month, brought into sharp focus the theme of last Sunday’s Caribbean Conference of Seventh-day Christians prayer breakfast, ‘Save Our Boys, Save Our Nation’.

With a smiling picture of the deceased child displayed on the electronic monitor, President of the Caribbean Conference of Seventh-day Christians, Pastor Dr Courtney Faulkner, challenged his audience at The Knutsford Court Hotel in New Kingston to use Galen’s death as a wake-up call for the church.

“It’s a serious morning,” he said, before reminding them of the instructions of Jesus in St Matthew as he questioned the continued effectiveness of the Church as the salt of the earth if it lost its flavour.

“As salt, we must effect change in our society. As an organisation, we must see this as our sole purpose and responsibility. Our young men – our boys – are our focus. We are here to pray for them, to expose and to educate ourselves on the issues they are facing. We must inspire our boys who are present to go back to their homes, their schools and their communities to make a difference,” he insisted.

The Gleaner team later caught up with three of the young men from different schools who shared their views on ways to transform this daunting challenge into reality.

For 16-year-old Kingston College fifth-former Ahejey Mattis, whose father died from natural causes, creating a significant void in his life, men’s weakness is at the root of many antisocial behaviours.

The weakness of men was what led them to malfunction.

“In my opinion, we are weak, in the sense that we do bad stuff to the women and when they actually do it in return, we can’t handle it. So I think it stems from weakness,” he shared.

Correcting the situation, he said, can start with ramping up public awareness on the underlying issues which feed into aggression then translates into murder or domestic violence. He added that this could be boosted with structured programmes in schools.

Mattis would come back to still the crowd with a moving rendition of Luther Vandross’ Grammy Award-winning hit, Dance With My Father.

For 16-year-old St Jago High School fifth-former Roberto Morgan, the increasing reports of violence against women is a reflection of the declining mores and general breakdown of society. He believes this can only be addressed by a comprehensive reset of the old-fashioned values of attitudes.

“I believe that if schools develop programmes showing students, especially boys, how to treat women, and educate and sensitise them about their roles as future fathers and family men, [and] if we reach out to God for strength and guidance, we can get there,” he told The Gleaner.

The response of 11-year-old St Richards Primary School grade-six student Bomani Francis showed that he, too, had been following news reports on the issue.

“I would say they are violent to women and girls because, while they are dating the girls, some girls like to date other men, and when they find out, they get really mad and do stuff that they shouldn’t do to girls. That’s my opinion.”

On the issue of what should be done to address the issue of violence against women, he thought long and hard before letting out a deep sigh, finally admitting, “I really don’t know.”