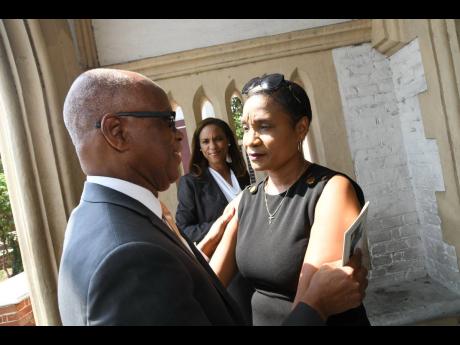 Jeffrey Paul (JP) Morgan, who led Jamaica’s Office of Utilities Regulation (OUR) from 2002-2008, was remembered as a natural diplomat with global reach and influence, during Tuesday’s service of thanksgiving for his life at the St Andrew Parish Church.

One of the outstanding pioneers of utilities regulation in the region and internationally, JP Morgan presided over a host of landmark regulatory decisions in the water, sewerage, electricity and telecommunications sectors.

Sibling Kathy Yearwood, who admitted to being his “spoilt little sister”, shared an account of how she came to fully appreciate his international reach, when her job took her to Ghana. Upon inquiring as to where she would be staying, Morgan calmly assured her not to worry because he would have someone there to take care of her.

When she shared this news with her friends they all had a good laugh, but upon reaching the hotel and checking in, she received a call from the front desk that someone was there to see here. Such was the impact of the man.

Described as a truly Caribbean man, it was recalled that he always pushed for harmonisation and collaboration in the region and was a champion for the Organisation of Caribbean Utility Regulators, on which he served as chairman and executive council member.

JP Morgan moved from being director general of the OUR to being the first chief executive officer of the Office of Regulations in the Cayman Islands, to being a board member and deputy chairman of the Utilities Regulation and Competition Authority (URCA) of The Bahamas, and being a regulatory consultant to the Independent Regulatory Commission.

Appointed at the establishment of the URCA in August 2009, he was reappointed by all subsequent administrations and served the organisation with distinction up until the time of his death.

In its written tribute, the organisation notes that, “Mr Morgan was pivotal to the effective setting up and launch of the country’s independent regulator and led in the organisation’s successful accomplishment of many significant milestones. These include the liberalisation of the telecoms market, both fixed and mobile, which involved the introduction of the competition framework, number portability, interconnectivity regulation and capacity building, particularly in the electricity sector.”

Meanwhile Chief Executive Officer Stephen Bereaux, URCA said: “There is no doubt that when judged, JP will be judged among the best, I feel blessed to have had his input in my life. I am a better person for it.”