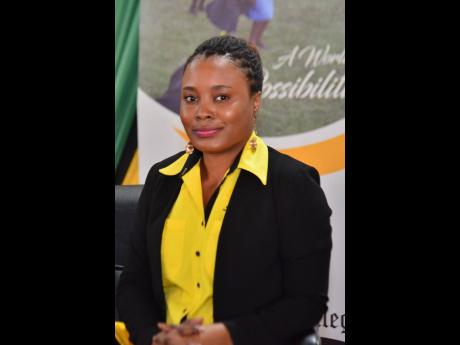 Kenyon Hemans/Photographer
SRC 2018-2019 Young Scientist of the Year, Dr Shadae Foster, who addressed students at the Conversation in Science Series held at The Mico University College on Tuesday.

When news broke that Shadae Foster’s mother was pregnant more than three decades ago, it triggered worry and whispers in her Westmoreland community.

Residents did not have high expectations of her because her mother had a mental disability and feared that the same fate would have befallen her.

Foster did not expect much of herself either.

“My grandparents were told to do away with the pregnancy. Plus, they were poor – they didn’t have any money,” Foster told the audience of female students at the inaugural Conversations in Science Series on Tuesday.

It was hosted by the Scientific Research Council (SRC) and The Mico University College on Tuesday, International Day for Women and Girls in Science.

“As I got older and recognised what was happening with my mother, I observed how people treated me. When people discovered that I belonged to her – ‘the mad lady’ – they would look at me in amazement,” the 31-year-old said.

Foster entered grade five at Savanna-la-Mar Primary School but was not able to secure placement at the much-sought-after Manning’s School in the parish.

She started classes at Frome Technical, determined to achieve, and that’s what sparked her love for the sciences.

“No matter what I did, I kept going back to it,” she said.

The thought of tertiary studies seemed impossible, but in faith, she applied to universities locally and abroad.

Foster found ways to “live beyond her barriers” and today holds a PhD in biochemistry from The University of the West Indies.

She recalled that she struggled adjusting to life in Kingston and was intimidated by students from traditional high schools.

“I applied for a student loan, and I had some assistance to pay for hall fees for the first year, but I didn’t know how I was gonna pay for food or books, but I persisted. I was told that, ‘you’re doing the sciences! It’s hard! There is no way you can get straight As over there. Go to the next faculty because yours has the highest failure rate,” she recalled.

Foster was unfazed and she completed her first undergraduate year with As and a few Bs.

Come second year, she was hit with another bout of challenges and was encouraged to sit the year out.

By all means, she had to finish.

“I sold a number of things, including my computer, to get some money and I persisted. I was travelling back and forth to Westmoreland because I didn’t have much money, and so I would go there to get some of the farm produce,” Foster said, adding that it was a means of cutting her food bill.

Foster received a scholarship to cover her tuition and considers her final year her best – she got straight As and made the Dean’s List.

“I decided that if I really want to be the scientist that I plan on being, then I needed to level up,” she said.

The then-20-something-year-old moved on to pursue a master’s degree, then a PhD, and in 2018, she was named SRC Young Scientist of the Year.

Her thesis, which was rated as the most outstanding, explored compounds extracted from rice as a treatment for diabetes.

Foster is a research scientist at the SRC, undertaking research that will identify, evaluate, and validate medicinal plants.

She is currently working with the Maroons on cacoon, a plant prepared during their yearly celebrations. So far, it has been found to be high in protein.

She is grateful for her family, friends, and those she met along the way who stood by her side.

“Life cannot only continue despite pain and hardship, but it can take on new meaning and purpose,” she told the young ladies at the end of her presentation.