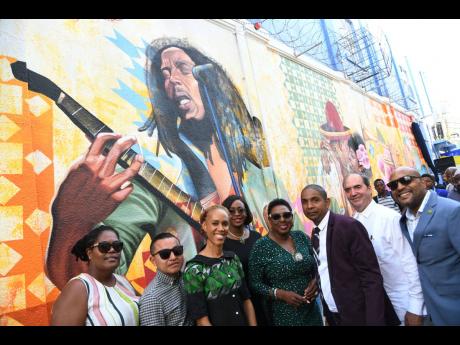 Kingston stands to reap strong economic dividends from the opening of Port Royal as gateway to the city, according to Mayor of Kingston Delroy Williams, who used Monday’s unveiling of a mural on Temple Lane, downtown Kingston, the first in a multi-agency collaboration, to share his vision for the city.

The Kingston and St Andrew Municipal Cooperation collaborated with the Embassy of the United States of Mexico and the Ministry of Culture, Gender, Entertainment and Sport to create a mural of a young couple kissing passionately, serenaded by a female saxophonist on the right, while to their left Bob Marley belts out one of his many hit tunes. It is the work of Mexican artist Irving Cano Gomez, with input from local artists.

Williams said over the next two years, Kingston is expected to welcome more than 25,000 stopover visitors, 10,000 of whom are expected to arrive this year.

“Just to put it into perspective, Kingston stopover arrivals increased by an average of 4.2 per cent annually. For 2018, the increase was 18,668 persons, according to the Jamaica Tourist Board, from cruise ships alone. We have more than 50 per cent of that growth secured without the [stopover] arrivals via the Norman International Airport,” the mayor disclosed.

He then went on to quote from an eight-month study conducted by the Florida-Caribbean Cruise Association, which estimated that, on average, each passenger at each stop in Jamaica spent an average of $111.82, which amounted to J$16,000 (each).

“This means a possible J$160 million will be pumped into the economy of the city during the course of this year from the arrival of cruise ships in Port Royal, and this is very conservative. This is big. The vendors in Port Royal will tell you how much they benefited in January with the arrival of the Marella Discovery 2. The city was brought back to life. Port Royal was no longer just fish and festival. Real economic activity is taking place there for the first time in over a century.”

“However, to maximise the returns, their needs to be a broadening of our investments with a deliberate strategy to position the country, Kingston, and our youth for these changes.

“This is uncharted waters for Kingston, but we will navigate it well. We will grow stopover arrivals by over five per cent for the first time. That is the vision – entrepreneurs, businesses, our youth, performers can all benefit. Everything we do is a small piece of the puzzle. Diversifying the economy of the city is not something we will realise in four years.”

Williams reminded his audience that since taking office, it has been a deliberate strategy of his office to take on one major challenge at a time, in the vision to make Kingston the ‘Light of the Caribbean Sea’, ‘Pearl of the Antilles’, and a major player on the Latin American landscape. He explained why this was a realistic goal.

“We are a city rich in culture, in history and creativity. We are this city that is nurturing the creativity of our young people. When you construct a bridge you bring all the hard sciences into play – mathematics, calculations, measurement. But the concept of the bridge is not found in the hard sciences, but is found in that deep creativity place within us by our Creator.

“And it is our nurturing of the imaginative faculties deep within that makes for solutions, and our major task for the city is to create a generation of people whose imaginative faculties are so developed that there would be no challenge, no problem for which they cannot find solutions. This project is a key part of the transformation of the city of Kingston. It is a small piece of the puzzle that speaks to a wider concept of the coordination between ministries and agencies in solving problems and in transforming our city.