Students awed by robotics in action at Mico University College 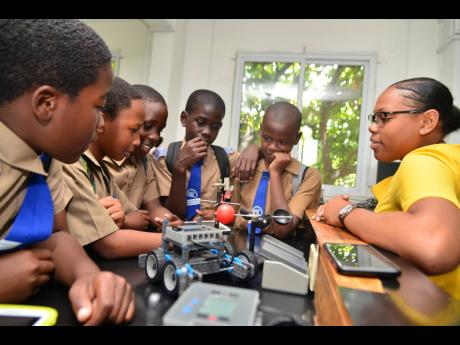 Kenyon Hemans
Students from Bamboo Primary School (from left) Jeremy Clarke, Jude-Riq Hall, Dewhane Davis, Alex Crosdale and Jamiel Woolery watch Shauntay Smith, a first-year physics student at The Mico University College, as she demonstrates how the robotic car works during the Conversation in Science series, held at the institution on Tuesday.

Various demonstrations of robotics in action triggered questions from primary and high-school students in the robotics laboratory at The Mico University College on Tuesday.

Those were a few of the questions they asked when second-year physics student Saienka Brown explained how the Van de Graaff generator is used to generate low-voltage static electricity.

It is the result of an imbalance between negative and positive charges in an object.

Powered by a crank which is moved in a circular motion, electricity is elevated to the giant globe at the top.

The students took turns winding the handle and anticipated hearing the crackling sounds as the electrons flowed.

The first National STEM (science, technology, engineering and mathematics) Centre for Research and Innovations in Teaching and Learning is expected to be opened in September 2020 at the Marescaux Road, Kingston university college.

It will be modelled off two international centres and comes at a cost of US$1.5 million.

Jude-Riq Hall of Bamboo Primary School in St Ann told The Gleaner that the highlight of his tour of the robotics lab was the demonstration of the Vex IQ.

“I learnt that you can programme robots with computers and they use batteries to charge them,” he said.

“When she pressed the button, the car could only go in one direction. It was amazing! I have never seen this in my life,” Jamiel Woolery, also from Bamboo Primary, chimed in.

Alphadine Dennis, one of the instructors and a second-year physics student, is eager to use robotics as a teaching aid.

“When students see real-life scenarios, they are better able to understand and relate to what’s being taught. The Vex IQ has a special program on the computer called Graphical Robotics for Vex Robots, and we use it in order to get the robot to go forward, backwards or rotate when we’re doing our labs,” Dennis explained, adding that the demonstration can be used to test linear and non-linear momentum.