Prison Polygraph Unit up and running 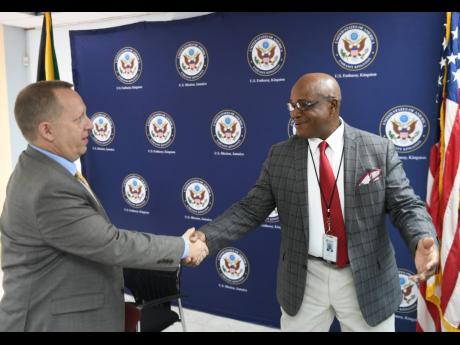 Ricardo Makyn/Chief Photo Editor
Deputy chief of mission of the United States Embassy, John McIntyre, (left) shakes hands with retired Lieutenant Colonel Gary Rowe, commissioner of corrections, at the handover ceremony of the Polygraph Unit to the Department of Correctional Services by the Embassy of the United States in Jamaica.

The Department of Correctional Services (DCS) has received a major boost in its ongoing drive to fight drug trafficking and indiscipline among staff at various adult correctional centres and juvenile institutions, with the donation of a Polygraph Unit by the United States Embassy on Tuesday.

The fledgling Polygraph Unit at the DCS works in tandem with its sister unit in the Jamaica Constabulary Force and already has been very effective.

One correctional officer who was among seven screened for the period 2019-2020 has been taken off active duty and his case has been forwarded to the commissioner of corrections and other officials for administrative review, which could lead to sanctions.

Since 2019, the DCS has screened a mix of 185 applicants and active officers, with only that one active member flagged among the 30 who raised eyebrows and the 29 applicants eliminated at the recruitment stage.

Deputy chief of mission at the United States Embassy, John McIntyre, described the outcome as “a true success” for Jamaica’s prison service and commended the organisation for promoting integrity within its ranks. He reiterated the embassy’s directive for other government agencies to move decisively to wipe out corruption.

“It is essential for leaders to demonstrate the political will necessary to combat endemic corruption, especially within institutions, by preventing corrupt officials from encumbering positions in the government, as well as holding corrupt officials accountable. You all have taken a massive step forward in establishing this unit and allowing it to go forward and operate. This Polygraph Unit is a positive step to increasing integrity within government institutions.

“Corruption causes citizens to lose faith in government officials and institutions. It facilitates a variety of other crimes, such as drug- and gun-trafficking, and allows criminal organisations to operate with impunity.

We will continue to strengthen the ability of the Government of Jamaica and its citizens to promote better public transparency, accountability and integrity,” said McIntyre.

Meanwhile, Commissioner of Corrections, Lieutenant Colonel Gary Rowe, in welcoming the enhanced fraud-detection of the DCS, spoke to the anticipated gains from its use.

“We realise that we need this to help inform our decision-making, which should be driven by data. ... I have already begun to see how best we can utilise this tool in our day-to-day operations.”

Rowe explained that a protocol would need to be established for the use of the unit and application of the information garnered.

“We have to go through certain steps and certain approvals, so it is a new idea, certainly for the DCS, but a relevant one at this point as we navigate forward,” he said.