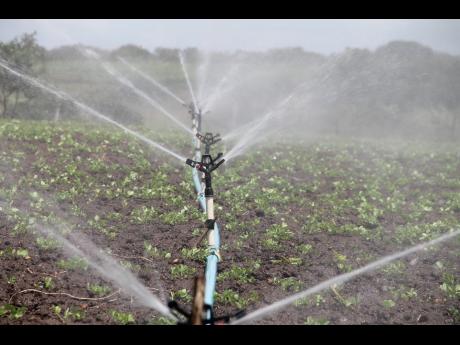 The Government will continue to rehabilitate irrigation infrastructure in St Catherine and Clarendon during the upcoming fiscal year, through an additional allotment of $250 million.

The money has been provided in the 2020/21 Estimates of Expenditure, now before the House of Representatives.

To be undertaken by the National Irrigation Commission, the works will include: replacement of an ageing and inefficient turbine at the Free Town No. 2 pump station; replacement of 865 metres of pipeline at the Clarendon Upper and Lower Rhymesbury pump station; installation of a solar photovoltaic (PV)-powered pumping station in Hounslow; and restoration of Rio Cobre declining infrastructure (Upper Old Harbour Branch).

Up to December 2019 under the project, 2,500 metres of canal line at the old Milk River canal were rehabilitated, in addition to 2,400 metres of pipeline at the Parnassus pump station, while lines were replaced at Rhymesbury.

The project, which seeks to reduce water losses and operational costs in select irrigation systems in the two parishes, began in April 2016 and is scheduled to end in March 2022.

In the meantime, $15 million has been set aside for the development of a project proposal for an irrigation system in Pedro Plains, St. Elizabeth.

It is being jointly funded by the Governments of Jamaica and France.