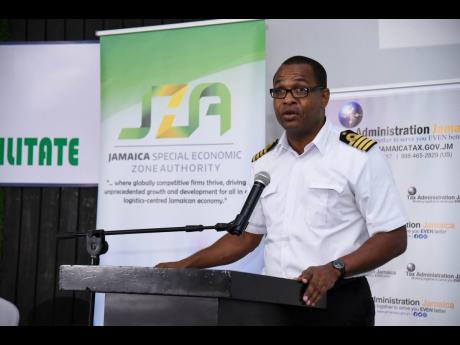 The Jamaica Customs Agency (JCA) has made arrangements to facilitate the efficient operations of special economic zones (SEZs) in Jamaica, as stipulated by the SEZ Act, 2016.

“These arrangements include the continued availability of customs services in SEZ to meet the needs of developers/occupants. We have customs agents stationed throughout the business day at various zones across the island, such as the Kingston Freezone, Kingston Wharves Limited and Garmex Freezone, to expand the availability of JCA services,” said Lieutenant Colonel Everton Morgan, manager, Freeport Export and Trans-shipment Unit, JCA.

He noted that to facilitate quicker customs-related transactions, the JCA uses the ASYCUDA World system, which enables electronic transactions, online payments, and pre-arrival clearance of goods.

“We’re coming from an analogue system that was pretty much archaic, and we’ve moved to implement a system which allows persons to stay anywhere, even in their bedroom, and access an automated platform for JCA data. Information entered using the platform is processed in real time, and this fosters greater efficiency,” Morgan explained.

He pointed out that the JCA not only facilitates the importation of capital goods destined to remain in special economic zones, but also transports such goods and equipment to the SEZ from the port of entry.

Morgan said the JCA has put measures in place to expedite the release of low-risk consignments for SEZ occupants, given that all regulatory and security requirements have been met.

“In keeping with our core function, the JCA has the power to determine the accuracy/authenticity of declarations concerning importation and exportation within SEZs,” he noted.

All goods entering and leaving SEZs are subjected to full examination to verify the accuracy of the information presented by SEZ developers and occupants to the JCA.

Morgan encouraged SEZ developers and occupants to ensure they make honest declarations when importing and exporting items, as a breach of the Customs Act can result in fines and, in more serious cases, imprisonment.