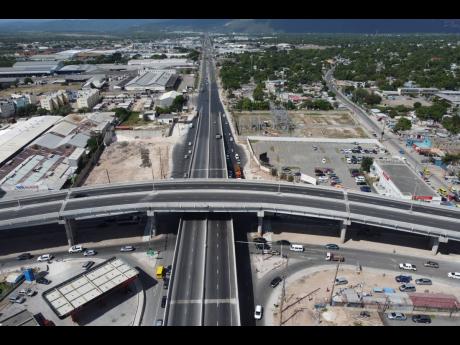 More than half the Jamaicans surveyed are convinced that roadworks in the Corporate Area over the past two years were worth the disruptions encountered, the latest RJRGLEANER-commissioned Don Anderson poll has shown.

Fewer than one-third of the 1,038 respondents polled responded negatively to the question, ‘Do you believe the roadworks in the Corporate Area were worth the disruption encountered in executing them?’

Ten per cent of the respondents didn’t have an opinion on the matter, while six per cent were ‘not sure’.

Milton Morris, manager of Gorgeous Flowers on Hagley Park Road – one of the corridors most affected by the multimillion-dollar fallout in revenue by the infrastructure overhaul – agreed with the 53 per cent who responded positively to the survey conducted between February 8 and 18. The poll had a margin of error of plus or minus three per cent.

On the other hand, a management representative of Chung’s Catering Services Ltd, with its operating base at 138 Maxfield Avenue, remained baffled as to the anticipated outcome of the roadworks.

STILL TOO MUCH TRAFFIC

“With all the roads fixed up, it just seems like more traffic, or could it be more vehicles on the road? I just don’t understand. With all these improvements in road surfaces, with allowances for more travel options, with additional routes, why is there still so much traffic? It just doesn’t make sense,” the marketing representative, who requested anonymity, told The Gleaner.

The disconnection of Gorgeous Flowers’ landline eroded revenue, forcing the company to forward all calls to cell phones. Increased mobile usage triggered additional costs. Despite this, many clients still could not get through, with some customers opting to take their business elsewhere, Morris told The Gleaner on Monday.

However, the landline was restored last week and has been working very well since.

“There are some customers we haven’t seen for a long time who couldn’t come because of the roadwork,” Morris said.

“My accountant told me that we lost more than $3 million because of the disruption and we are not going to be seeing any compensation because they are saying that only (those) who had to give up sections of their land will be compensated.”

The Chung’s representative said that on the other side of town, delays were still hampering its catering service.

“We were talking about how bad it was before, but now there is no improvement. What we ending doing is asking a lot of people to come and pick up, so we don’t offer delivery so much because we can no longer guarantee on-time delivery,” the representative said.

“I guess this will continue until we can get a better reading of the traffic situation. Most clients understand and have no problem picking up their orders because they understand that traffic is everywhere nowadays.”

Meanwhile, Morris is optimistic that some of the investment options he was forced to initiate during the disruptions will pay off to help the company climb out of the red.

In addition to offering discounts, Gorgeous Flowers also rolled out a motorcycle delivery option, given that the bikes could navigate the then bumpy road surfaces with less hassle.