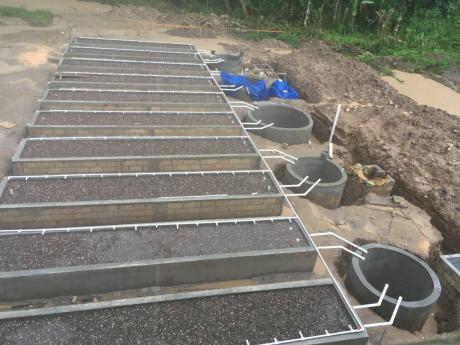 Contributed
An aquaponics system under construction in Upper Clarendon.

FIVE COMMUNITIES in the Upper Rio Minho Watershed (URMW) of Clarendon will be better able to adapt to climate change while increasing their earning capacity, with the recent launch of five innovative aquaponics systems.

The communities of Aenon Town, Ritchies, Alston, Johns Hall and James Hill, with a combined population of over 10, 333 persons, will see their new aquaponics systems operated by their Community Development Committees.

The systems were provided by the Adaptation Programme and Financing Mechanism (AP&FM) project of the Pilot Programme for Climate Resilience (PPCR) through INMED Partnerships for Children and their innovative INMED Aquaponics programme.

“It is an exciting time for the project, as these systems will greatly boost agricultural production in the communities. It will reduce their dependence on the changing weather patterns in order to produce because drought, for example, will not cripple the farmers as it used to,” explained Dr Winsome Townsend, project manager for the AP&FM.

Aquaponics is an innovative farming technique that combines aquaculture (fish farming) with hydroponics (soil-less crop production) into a closed system that is resilient to destructive climate change events.

It is a method that boosts crop production up to 10 times higher than traditionally cultivated plots of equivalent size. It uses 85-90% less water and uses no chemical fertilisers or pesticides. Its low energy consumption provides year-round crop production and uses much less labour than traditional farming, making it accessible to individuals with disabilities, beneficial for female-led households and attractive to youth.

“INMED Partnerships for Children and INMED Caribbean are proud to be working with these exceptional communities in the crucial watershed area of Clarendon, and are committed to provide crucial training and mentoring to help them be successful in achieving food and economic security and building climate resiliency,” noted Dr Linda Pfeiffer, INMED’s president.

The aquaponics systems are a part of the activities undertaken under the AP&FM to help to reduce Jamaica’s vulnerability to climate change. The island has been experiencing impacts, such as stronger hurricanes, severe flooding, prolonged droughts and sea level rise. Between 2001 and 2012, Jamaica experienced 11 storm events, including five major hurricanes and several flood events amounting to about J$128.54 billion in loss and damage.

“We commend these communities for their proactivity and recognising the importance of building resilience to climate change. They have led the charge for implementing the commissioning of these systems which will boost their agricultural outputs critical to ensuring food security especially in periods of drought,” said Therese Turner-Jones, general manager for the Caribbean Country Department of the Inter-American Development Bank (IDB).

The Government of Jamaica, the IDB and the World Bank developed the island’s PPCR to help the country to strengthen its climate resilience through enhancing adaptive capacity across priority sectors. PPCR has five projects being implemented to address varying areas of vulnerability. The AP&FM is the largest of the five PPCR projects in Jamaica.

“This project is one that the community has really embraced. I can see based on what they tell me that they have bought into it,” said Morene Marshall, president of the Ritchies Community Development Committee.

“I think the project will provide employment for some persons. It can also bring about togetherness as well as we have representatives from all the different churches in the area working together on it,” she added.