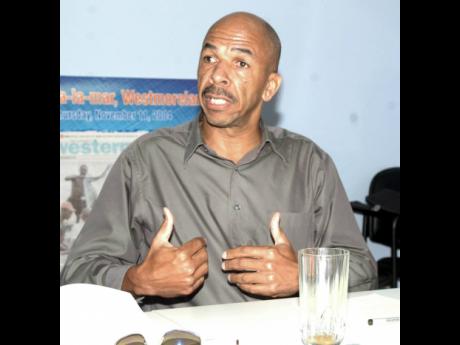 A RECENT symposium on ‘climate justice and the Caribbean’ would seem to suggest that the conservation of Jamaica’s ecological gem, the Cockpit Country, should be looked at through the lens of climate justice.

“When we better understand the origins of our unsustainable energy culture in this vast system of global slavery and indigenous expropriation and displacement, we see that the contemporary, uneven socio-ecologies associated with the rise of the industrial world are based not simply on the use of fossil fuels but more essentially … on the racialised denial and foreshortening of life for the sacrificial majority of black, brown and indigenous people, and their relegation to the so-called sacrifice zones of extractive industry,” noted Professor of sociology at Drexel University Mimi, Sheller.

She was speaking at the event, which was co-hosted by Rutgers University and The University of the West Indies (UWI), at the UWI Regional Headquarters in January.

“Bauxite mining in Jamaica is a prime example of this, as (Dr) Esther (Figueroa) has shown us, where the precious interior of the Cockpit Country, with Jamaica’s most important sources of water and the surrounding prime farming land, are still being sacrificed for ore to benefit the global multinational companies and not the people of Jamaica,” Sheller maintained.

The Cockpit Country – the subject of much debate over many years – is home to not only endemic plants and animals, but also Maroons. In addition, it is also responsible for the supply of some 40 per cent of freshwater, which is a resource threatened by climate-change impacts, including warmer temperatures, extreme drought conditions, sea level rise, and coastal erosion.

Figueroa, an independent film-maker, recently did the feature documentary Fly Me to the Moon, which, as described, takes viewers “on a journey into the unexpected ways we are all connected on planet Earth, by following aluminium – the metal of modernity – around the world and into space. We travel for over 100 years, visiting places as far flung as the moon, Jamaica, India, Suriname, Canada, Cuba, Japan, Hungary, Iceland, Australia, Vietnam, the United States of America, encountering along the way human triumphs, technological innovations, multiple wars, societal upheavals, environmental devastation”.

According to Sheller, who was delivering the keynote address at the symposium, the “coloniality of climate is not an event that happened in the past”.

“It is an ongoing relation of uneven consumption based on the exploitation and sacrifice of some peoples and lands and ecologies for the benefit of others,” she said.

“Every day we sacrifice the places where mining takes place, drilling, forest burning industrial agriculture, polluting factory production, water extraction, waste disposal and toxic dumping. Our food system is equally reliant on fossil fuels and distant plantations, and contributes huge amounts in forest clearance, as we have seen in the burning Amazon. And this is crucial for understanding the impact of the hurricanes that have taken place in the Caribbean and the climate death that produces vulnerable populations,” the professor added..

Hugh Dixon, who heads the South Trelawny Environmental Agency, has noted his agreement.

“When you think of the Maroons, our ancestors, who traversed the landscape to sustain themselves, protect their culture and secure their freedom in the terrestrial spinal ridge and beat the colonial administration of the day … to control, own and secure their right to the landscape, then to at a later time in the historical continuum, to come back and want to remove them from the same space with the same objective of serving a modern post-colonial conglomerate in the north means that the injustice continues,” he said.

“If we are not congnisant of that initial objective which caused our people to be relegated to the spinal ridge when they fought for their freedom, gained it, and fast-forwarding to now, where they are being dislocated to obtain the ore (bauxite), which is of interest to the corporate interest, it is an accurate analysis and an indictment against those who lead us in their short-sightedness,” added Dixon has spent years in the lobby to protect the Cockpit Country from bauxite mining.

Beyond that, he said any failure to protect the Cockpit Country – where even now there is ongoing ground truth to determine a boundary – is an impediment to climate resilience for Jamaica.

“The fact is that in the current dispensation with climate change and its implications, the exploitation of these resources have a direct bearing on the exposure that we subject ourselves to with the impacts of climate change,” Dixon said.

“If you destroy the landscape to get to an ore and in so doing you deprive your populace, your indigenous people, your sustainability, to the priority given to external corporate entities, then you are opening yourselves up to the climate change, which is an inevitable destructive agent,” he said.