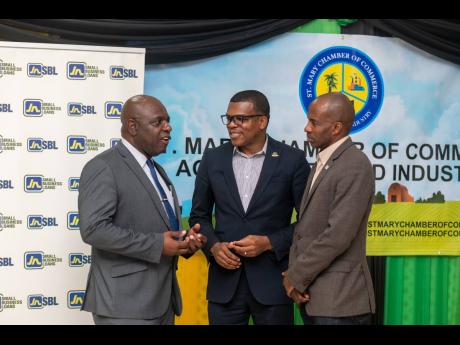 St Ann-based banker Dr Ransford Davidson is suggesting that a partnership between the Government and the private sector could assist to address what he observes as being a ‘digital divide’ affecting the pace of rural development.

Such a partnership, the banker reasoned, could result in stronger policies to improve access to reliable Internet and telecommunications services in rural areas.

Davidson, who is the business relationship and sales manager at JN Bank Brown’s Town and St Ann’s Bay, was speaking to members of the Jamaica Chamber of Commerce at a luncheon hosted by the St Mary Chamber at the Casa Maria Hotel in the parish recently.

Responding to complaints from business operators in some rural area about the quality of telecommunications services they receive, Davidson argued that addressing any existing divide is necessary to reduce hurdles for businesses and to increase efficiency and productivity.

“The reduction in rural poverty now relies heavily on how we strengthen commerce in our rural parishes to generate jobs, and to provide the services needed to sustain rural populations,” he said.

He also noted the wide disparity between poverty in the country’s cities and rural areas. According to the Statistical Institute of Jamaica, poverty in 2016 was 11.3 per cent in the Kingston Metropolitan Region, which comprises Kingston, St Andrew, Portmore and Spanish Town; and 20.6 per cent in rural areas.

“In this 21st century, much of that (reduction in poverty) relies on how we reduce the digital divide so that rural businesses and citizens are connected and have the access to information, as well as the tools to empower themselves,” he said.

Davidson stated that rural parishes were underserved by digital resources, noting that close to 55 per cent of financial technologies, such as ATMs, were located in the KMR, while the four parishes with the lowest penetration – St Mary, Trelawny, Portland and St Thomas – account for about 10 per cent of distribution.

He noted that if properly positioned, technologies such as ATMs, point-of-sale terminals and online banking platforms can reduce banking costs to people and businesses, as they can provide a variety of functions that reduces the need to process paper, which comes at a cost; the need to store and transport large amounts of cash; and cut the time it takes for businesses to get transactions done, he said.

However, he added, “Such technologies are all hinged on the quality of [Internet] connectivity.”

He commended the Government for its move to introduce community access points under the banner of the Universal Service Fund, but encouraged the expansion of the infrastructure.

He said industries on which rural parishes depend are changing and are becoming increasingly dependent on quality digital services. For example, Davidson pointed out that tourism is changing due to the infiltration of platforms such as Airbnb and, therefore, businesses need quality services to adapt.

“When we think of tourism now, we must also recognise that it is shifting from merely staying in a hotel and on the beach, as millennials, and other like-minded people, want to travel and immerse themselves in cultural experiences that can be captured on smart devices, which they share on social media platforms for the world to see. Therefore, reliable Internet connection is important to delivering these kinds of experiences inside and outside our cities, and for small accommodations and other small operations, which are a fundamental part of this new tourist experience, to market themselves and benefit from the sharing economy,” Davidson related.

He said quality Internet connection is also important to advancements in agriculture, pointing to the Agricultural Business Information System operated by the Rural Agricultural Development Authority, which assists in collecting and analysing agricultural data to help with managing production and distribution more efficiently and, consequently, food prices.

Davidson further argued that having access to quality Internet in rural areas can help businesses in major towns and cities to manage workflow. He noted that with the improvement and expansion of the country’s highways and arterial roadways, more people are opting to live outside of Kingston and travel to work because of cheaper housing.