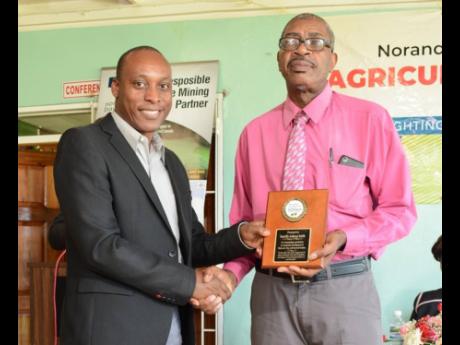 Nine community members drawn from Noranda Bauxite’s operating areas in St Ann were presented with awards of excellence by the Noranda Community Council recently, for their contribution to various areas of society.

The nine, five men and four women, hail from the communities of Discovery Bay, Farm Town, Queenhyte, Liberty Hill, and Thicketts in the parish.

They were given plaques for their contribution, with the Grateful Hill Baptist Church choir brought in to pay tribute to them in song.

Guest speaker at the ceremony, Mayor of St Ann’s Bay, Michael Belnavis, congratulated the awardees on their “role-model examples of community service.”

Belanvis also hailed Noranda for being an integral part of St Ann’s economic base and referred to the company’s “generous contributions to roadworks” in partnership with the municipal corporation.

“Noranda makes a most significant contribution to Jamaica in terms of foreign exchange, national budget support, employment, education, and community development. When you consider the importance of the bauxite industry to Jamaica, you only have to think Noranda,” Belnavis said.

Meanwhile, Noranda’s vice-president and general manager, Delroy Dell, also hailed the awardees for their contribution to their communities, saying that he was humbled by their examples of unselfish and dedicated service.

“We lift them up as role models in our society. By any standard, our awardees can be judged to have achieved excellence in the pursuit of their goals. They represent the best of community and are living reminders of those old-time community values of good manners, sharing, discipline, respect,” Dell pointed out.

The Noranda Community Council consists of representatives of the various districts around the company’s operating areas, working with employees, Government, and civic agencies. The council acts as a forum for communication, problem resolution, and community development and designed the awards programme to recognise persons worthy of recognition.