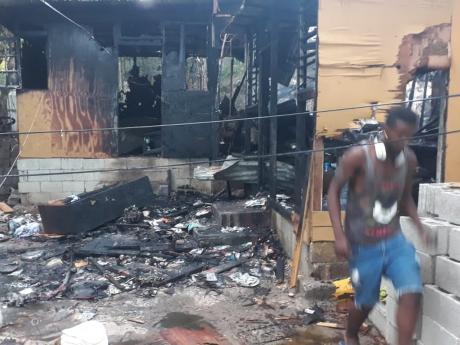 A man walks near the rubble after a fire destroyed three board houses on Hazard Drive in Clarendon on Wednesday - Contributed.

About 15 people have been left homeless following a fire on Hazard Drive in May Pen, Clarendon on Wednesday afternoon.

Camille Davis, one of the victims, told The Gleaner that she was in a room when she heard her sister crying out.

“It was then I saw the fire inside the room,” she said.

The blaze ravaged the three board houses in the yard destroying appliances and the possessions of the occupants.

Davis, however, managed to save some of her belongings.

"My two older sisters lost everything: fridge, washing machine, everything destroyed in the fire,” she said, adding that they will now need assistance.

Councillor for the May Pen Division Kenneth Davis told The Gleaner that quick action by responders from the May Pen Fire Department prevented more houses from being destroyed.

Davis, who is also the chairman of the Clarendon Poor Relief Committee, said, already, he has started to mobilise various agencies to assist the victims.