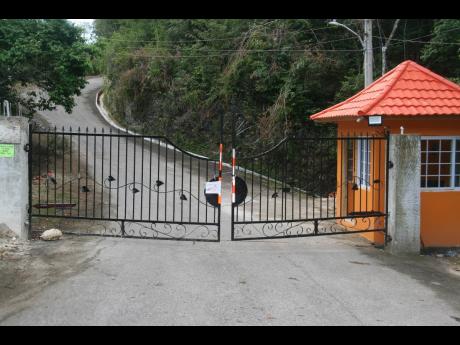 One of the entrances to the Orchard Gardens community in Hopewell, Hanover.

The decision to install three sets of security gates and security guards at two of them in the Orchard Gardens housing scheme in Hopewell, Hanover, has not gone down well with persons who have grown accustomed to using the community as a jogging trail and are now prevented from doing so.

“It (Orchard Gardens) has been taken over by the parish council (Hanover Municipal Corporation) and I cannot see how the parish council can be responsible for the area and is allowing them to turn it into a gated community,” an affected resident told The Gleaner recently.

However, it would appear that the ‘gated arrangement’ at the upper- and middle-income housing development was done without the requisite authorisation, as according to councillor Devon Brown, who represents Hopewell in the Hanover Municipal Corporation (HMC), no permission was given by the HMC for the Orchard Gardens community to be turned into a gated community.

He further stated that he has been receiving numerous complaints from residents in Hopewell, especially those who exercise in the mornings, using the Orchard Gardens area as a part of their route.

“The matter was discussed at a recent HMC planning meeting, and a decision was taken that discussions are to be held with the Orchard Gardens Citizens’ Association’s leadership about the matter,” said Brown.

When The Gleaner contacted Dalton Hastings, president of the Orchard Gardens Citizens’ Association, he said the security system put in place at the entrances to the community is really about securing the residents and their properties.

“Orchards Gardens is not a gated community. What we have done is put in some security gates,” Hastings explained, further arguing that the HMC was fully aware of the plans to implement the security measures for the community.

“As an association, we would have written to the parish council, and would have done all that we are supposed to do and received all the necessary approvals for all that was happening,” said Hastings, who noted that they have documentary evidence to support their claim.

Contrary to Brown’s statement, it would appear that the HMC was fully conversant with some aspect of what is taking place at the entrance to the community. According to David Gardner, the chief executive officer of the HMC, he had personally gone there and observed the operations at the gates.

“I myself was being asked for my identification before I am allowed to go into the development,” said Gardner. “It was made known from the outset that people like the Fire Brigade, public health, and other regulatory authorities would have to have free access.”