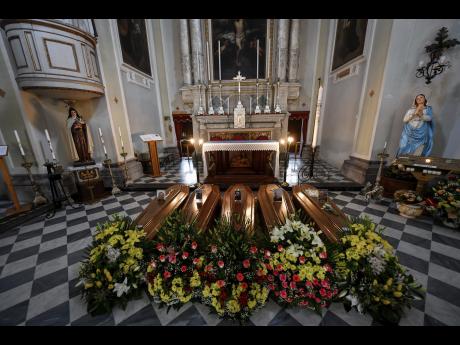 Cuomo said the government is seeking to increase hospital bed capacity by 50 per cent, up to 25,000 more beds. Officials have also identified two million protective masks to send to hot spots.

The state is reviewing four possible locations for temporary hospitals, which would be operated by the Army Corps of Engineers. The governor also said a million N-95 masks are being sent to New York City on Saturday, with another 500,000 masks going to Long Island. He is also trying to find a supplier for more gowns, and clothing companies are converting to make masks.

“Everything that can be done is being done,” he said, adding, "We are literally scouring the globe looking for medical supplies.”

New York has seen about 10,400 COVID-19 cases, and about 1,600 people hospitalised. Spread of the rapidly advancing disease has strained health care systems across the globe, and three American states with a combined population of 70 million are moving to restrict residents to their homes to prevent its spread. California started restricting residents Friday, and New York and Illinois were to follow this weekend. Connecticut and Oregon were preparing to do the same.

In Italy, more than 60 per cent of the latest deaths occurred in the northern region of Lombardy, whose hospitals have been reeling under a staggering case load that has left intensive care beds hard to find and respirators in short supply.

Officials said that on Sunday a team of 65 Cuban doctors and nurses, with experience in battling Ebola outbreaks, will arrive in northern Italy to help in the hard-hit Lombardy town of Cremona.

Italian health officials realise they need to shorten the time between emergence of symptoms and diagnosis, said Silvio Brusaferro, the head of the national Superior Health Institute. Currently that lag is about five days, he said.

The new increases in Italy come nearly two weeks into a national lock down in a desperate bid to contain the contagion.