New York to shut down, as it becomes next COVID-19 hotspot 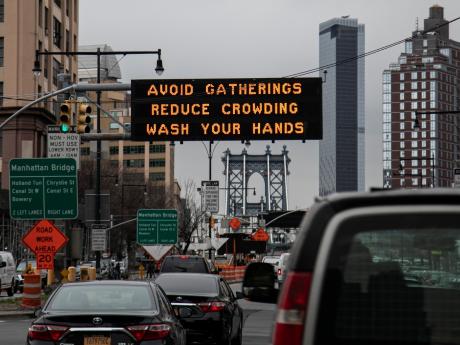 The Manhattan Bridge is seen in the background of a flashing sign in this March 19 photo, urging commuters to avoid gatherings, reduce crowding and to wash hands. New York is fast becoming one of the biggest hot spots for COVID-19 (AP photo).

(AP): New York City’s mayor is preparing to order New Yorker's to remain behind closed doors in an attempt to slow a pandemic that has swept across the globe and threatened to make the city of 8.5 million one of the world’s biggest coronavirus hotspots. Officials worldwide warned of a critical shortage of medical supplies.

Mayor Bill de Blasio also called for getting everything from masks to gowns, as well as doctors and other medical workers to New York City, and asked President Donald Trump to have the US military take over the logistics of making and distributing medical supplies.

“I can’t be blunt enough. If the president doesn’t act, people will die who could have lived otherwise,” de Blasio told NBC’s “Meet The Press.”

The top infectious disease expert in the US promised New York City and the other hard-hit places that critical supplies will not run out.

The medical supplies are about to start pouring in and will be “clearly directed to those hot spots that need it most,” Dr Anthony Fauci, director of the National Institute of Allergy and Infectious Diseases, said on CBS’ “Face The Nation.”

However, Fauci and other emergency officials did not give hard figures on the number of masks or anything else on their way. New York Gov. Andrew Cuomo urged federal officials to step in quickly as hard-hit states outbid each other for ever scarcer supplies, sometimes doubling or tripling prices.

In Washington, negotiators from Congress and the White House resumed top-level talks on a $1.4 trillion economic rescue package, urged by President Donald Trump to strike a deal to steady a nation upended by the coronavirus pandemic. Trump appeared confident about the nation’s ability to defeat the pandemic soon even as health leaders acknowledged that the U.S. was nowhere near the peak of the outbreak.

Worldwide, more than 316,000 people have been infected and nearly 13,600 have died, according to Johns Hopkins University. About 150 countries now have confirmed cases, and deaths have been reported in more than 30 American states.

There were more than 27,000 cases across the U.S. and 375 deaths. New York state accounted for 114 deaths, mostly in New York City, where there were more than 4,400 infections, but officials warned the concentration may be more because of increased testing.

On Sunday, New York passed Washington state, the initial epicentre of the US outbreak, in the number of fatal cases. Only China, Italy and Spain have reported more COVID-19 cases than the US.