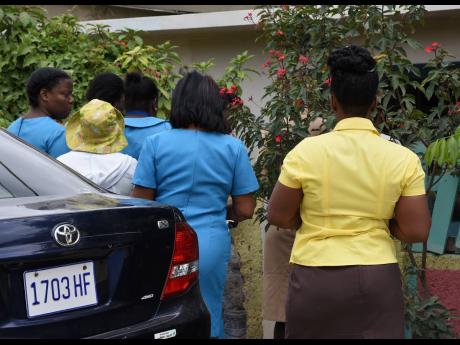 Ian Allen
Healthcare workers were conducting temperature checks on residents of Pondside in St Thomas on Thursday, as Jamaica seeks to contain a COVID-19 outbreak.

Curious residents in Eight Miles, Bull Bay, St Thomas, peered from behind closed gates on Thursday as health officials went to several houses along the road testing the temperature of residents.

In Pondside Lane, two pickup trucks marked Ministry of Health and Wellness and carrying at least four public-health nurses were observed by The Sunday Gleaner team. The community is just beyond the areas bordering St Andrew and St Thomas now under quarantine, where Jamaica’s first coronavirus disease 2019 (COVID-19) patient stayed during her visit from the United Kingdom earlier this month.

No member of the medical team was observed wearing gloves, mask, or any protective gear as one official held a temperature machine at the forehead of each person while another recorded the information.

They were unwilling to talk to The Sunday Gleaner during the operation as the angry-faced personnel took no questions and appeared upset at the sight of the news team in the area.

However, South East Regional Health Authority chairman Wentworth Charles later said that the team was from the Kingston and St Andrew Parish Health Association and included public- and community-health professionals.

Inside the trucks were machines resembling those used in the fogging for vector control. The news team was told by the residents that they were unaware of why the team was visiting, but they had been informed that the areas would be sprayed on Friday evening.

They were, however, aware of the lockdown measures implemented by the Government even as they hoped to be declared free of the respiratory virus.

One man, in the first home where the temperature checks were observed, said he had been tested but was reported to be normal.

“You see that pine tree in the yard? Is that me boil and drink – the pine needle leaf tea. I am a bush man, and I turn to my herbs. I see it on YouTube that it can drink, and it keep down fever and cold. So I know that’s why I good,” he said through a window.

The man, who did not give his name, said he was not placed in quarantine and neither had he come in contact with any of the suspected individuals.

A YouTube search found several videos extolling the benefits of the pine needle tea, which is made by steeping the needles in hot water for a few minutes. It is said to be an ancient remedy used to promote fast healing when modern medicine wasn’t available. It is supposed to quickly cure a cold or infection and can be boiled then soaked in gauze to disinfect cuts and wounds. The aroma from the tea is said to have a calming effect on the body and is useful for those with depression. The videos, however, had disclaimers, advising persons to seek medical attention.

Meanwhile, despite a government ban on gatherings of no more than 20 persons, 47 persons, including many without shirts, were seen on a construction site on a playing field across from Copacabana.