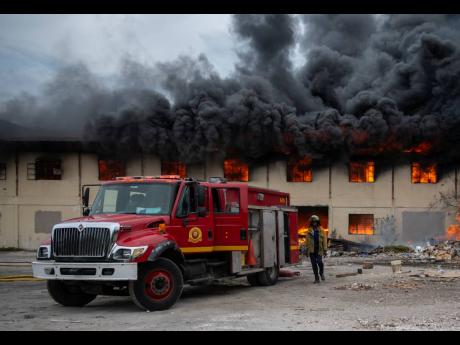 File
Members of the Jamaica Fire Brigade on the scene of a fire in 2019.

Deputy Superintendent Raymond DeSouza, who heads the Hanover division of the Jamaica Fire Brigade, is appealing to residents of the parish to familiarise themselves with the telephone numbers of the brigade so that when necessary, emergency calls can be made speedily.

Speaking at the recent monthly meeting of the Hanover Municipal Corporation (HMC), DeSouza expressed concerns about the increase in the number of fire and other emergency calls received during the month of February in comparison to January. He said that while his team is totally committed to the saving of lives and property, some of the calls are not being made in a timely manner.

“While we can mitigate and minimise the loss to property within the parish, our investigations also found out that one of the causes (for extensive property losses occurring) is that persons within our space still do not have a number for the fire brigade station within the parish,” DeSouza told The Gleaner in an interview subsequent to the meeting.

The fire chief said that the increase in fires within the parish over the last month was for both bush and structural fires and has resulted in great losses. He noted that investigations have revealed that it is while fires are occurring and, in some instances, when the fire is far advanced that persons scramble to ascertain the number for the fire service.

In DeSouza’s report to the HMC for the months of January and February 2020, it was revealed that while in January, the department responded to 24 genuine fire calls, in the month of February, they were called on to respond to 54 genuine calls. The fires, collectively, resulted in property loss of just under $6 million in January and approximately $13 million in February.

DeSouza further told The Gleaner that a collaborative effort will be embarked on with the HMC through its disaster preparedness committee to publicise the numbers. He added that members of his department had been sharing the numbers with every organisation and individual with whom they interact on a daily basis.

“We want persons to place it (the fire emergency numbers) in their homes. Place it on your fridge at home, and persons with large amounts of contacts in your phones, make sure the contact numbers for the fire service are there,” he said.