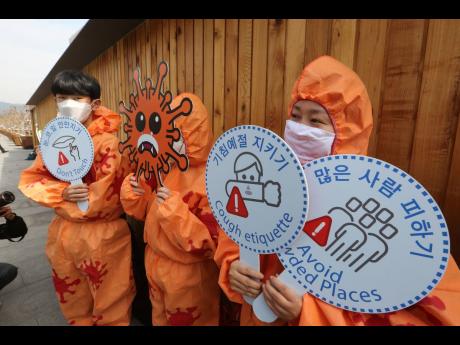 At least one Jamaican living in South Korea has reported that xenophobia in the South East Asian nation has increased tremendously since the outbreak of the novel coronavirus that causes COVID-19, leaving her and other Jamaicans feeling ostracised.

According to Shanese Watson, a Jamaican national who has been living in South Korea for almost four years, since the outbreak of the virus, South Koreans have increased their paranoia towards foreigners.

“They scorn mostly Chinese persons overall but also just foreigners in general. I had a situation where I got on to the train, but I did not have on my mask. It was in my hand, and it’s like everybody wanted to run from me, but I was looking over to the opposite side, and there were Koreans who weren’t wearing any masks, and no one was running away.

“It bothers us because the COVID-19 is not a foreigners’ virus, but a lot of the cases that have come up are from persons who have been travelling to and from South Korea, so I can understand if it is that persons are trying to be careful,” Watson said.

Further, the educator shared that South Korea has implemented stringent laws to cauterise the spread of the COVID-19 virus but that officials have been taking a firmer hand towards non-nationals of the country.

“They had implemented stringent rules that if you are found in the public without a mask, you will be fined, especially as a foreigner, and the fine, in Jamaican dollars, would be more than $50,000. If you are found gathering anywhere with more than three persons for any social gathering, you are going to be fined as well. They are also being extra stringent on foreigners because a lot of the persons who are having COVID-19 symptoms are actually foreigners. A lot of stringent conditions are being put on us, which is kind of unfair, but I understand,” Watson said.

She added that police officers can also be seen patrolling the streets to ensure that everyone is wearing a mask. Since its first confirmed case on January 21, South Korea has recorded, up to yesterday, 9,332 cases and 139 deaths.

The country has, however, now seen a general decline in the number of new coronavirus cases, as low as 74 and 76 each day, compared to its peak of 909 cases in late February.

This is because of its expansive and well-organised testing programme, along with its intensive efforts in tracing and quarantining those whose have had contact with infected persons.

Watson said that although the country’s stringent protocols have given her a sense of safety, she still ensures that she takes vitamins to help her to prevent contracting the virus.

Kelsie Clarke, another Jamaican national living and working in South Korea, said that she, too, has been taking extra precautions incessantly in an effort to not catch the virus.

Clarke, who works in a trading company, said that unlike others, she was not given the opportunity to work from home and therefore has to take public transportation daily.

“I don’t touch any surface in the trains anymore. I walk with my hand sanitiser and ethanol spray; my hands are so dry now because of how much I wash my hands and use hand sanitisers.

“However, I am a type of person that over-reads and over-researches and over analyses things, and I do know they say that surface contact is very rare, and so is open-air contact, and everybody wears masks, so it kinda gives your psychological mindset a break, knowing that if someone does cough, they are coughing into their own space,” she said.

Lauding Korea’s healthcare system, Clarke said that she and all other foreigners who are in the country on visas to attend school or work are insured, which makes treatment extremely affordable, taking a huge load off their backs.