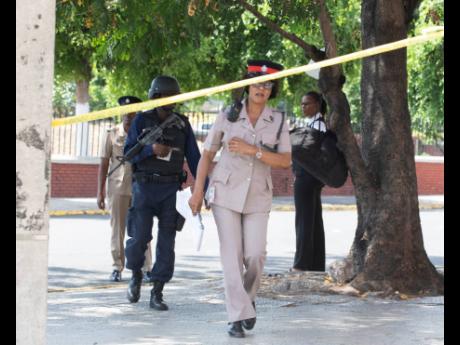 Gladstone Taylor/Multimedia Photo Editor
Members of the Jamaica Constabulary Force at the cordoned crime scene where an alleged thief was shot dead on Monday, March 23, at East Parade in the vicinity of Coke Memorial Methodist Church.

THE COVID-19 pandemic came into the firing line of a self-confessed “puss” – a woman who admitted to her own sleight-of-hand exploits – as she bemoaned the murder of her stepson, a reputed robber and housebreaker, on March 23.

She made known her grief that the unemployed man, whose menacing acts, she says, are known by many in Kingston’s commercial district, should not have died at the hands of a gunman.

The woman, who did not give her name, told The Gleaner that 26-year-old Andrew ‘Ten Pound’ Daley was a professional thief, even as she insisted he was not a violent and dangerous criminal.

“A thief, a grab dem man deh grab chain and tek weh people things ... . A nuh gunman,” she said. “The whole o’ town know say him a thief. A better police did kill him.”

In one of her several outbursts last week, she threw her hat to the floor in agony, lamenting that Daley died because the coronavirus outbreak had caused traffic to become so thin that the shopping district no longer had sufficient prey. Patrols by the police were also said to have increased.

“The time stiff from this corona business come in, ‘cause me a puss, too ... . Nah tell no lie, from the corona thing come in, everything tighten up,” she told The Gleaner amid her fresh grief.

“As you look, you see a police, so him nah really go look nothing fi thief.”

Reports are that about 1:40 p.m. last Monday, explosions were heard at East Parade outside the Coke Memorial Methodist Church.

The police were summoned, and Daley was seen lying in a pool of blood with what appeared to be gunshot wounds to his upper body.

He was pronounced dead and his body transported to the House of Tranquillity morgue.

The Kingston Central police are investigating.

The woman said that Daley’s death was ultimately the result of a war in the west Kingston community of Denham Town, where they live.

Denham Town was in October 2017 declared a zone of special operations – a security initiative that gives increased powers to the police and military.

Last Monday at East Parade, downtown Kingston, tensions heightened as the unidentified woman castigated the police for failing to prevent murders and shootings in Denham Town.

Daley was reportedly on his way to his father to collect money for food.

The elder Daley could not hold back the tears when he visited the morgue to positively identify his son.

On seeing him lifeless on the bed, he wept, muttering that he did not deserve to die like that.

Andrew Daley’s youngest daughter could not console herself, falling to the floor in sorrow.

His stepmother was defiant and said, “Sir, is a thief, is a thief dem lick down ... but him never did a thief, though,” she said. “Ten Pound a nuh gunman, him a thief, him a housebrucka.”

Up to Saturday, March 21, the police division had recorded 11 murders, two more than for the corresponding period in 2019.