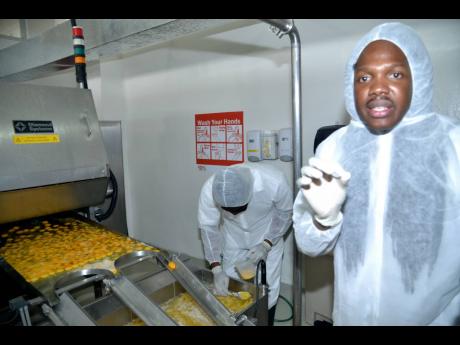 File
Damion Crawford explains the production process during a tour of his Convenience Foods Liquid Eggs factory on Bay Farm Road, St Andrew, January 26, 2017. The operation has seen a slump in business with some of its big-spending clients, including hotels, shuttering since COVID-19 emergence in Jamaica.

The economic slowdown triggered by the COVID-19 pandemic has dealt a harsh blow to the operations of Crafton Holdings, the liquid egg plant run by Damion Crawford.

The academic-and-politician-turned-entrepreneur said that his company might be forced to take drastic actions in the coming weeks as it reels from the impact of the novel coronavirus outbreak and the constriction on commerce and movement.

The manufacturer and distributor of pasteurised liquid eggs, which operates from factory space at Bay Farm Road in Kingston 11, as well as an egg farm in Rosend, St Mary, is now in limbo with the scaling back on liquid egg supplies used by bakeries.

“We might have to kill some birds, as the state of uncertainty continues,” Crawford told The Gleaner on Sunday.

With a 30 per cent fall-off in sales already, the company, which trades as Convenience Foods Liquid Eggs, faces a balancing act of procuring feed and staunching the haemorrhage to revenues.

“I can’t tell you what is happening with the rest of the industry, those farmers who supply supermarkets, but we are suffering dramatically,” he continued.

Among the clientele which Convenience Foods enjoyed prior to COVID-19 were bakeries Tortuga and Jamaican Biscuit Company, the Sandals Resorts group of companies, and Hilton Rose Hall. It also supplied the school meal provider Nutrition Products Limited.

“We are suffering bad,” Crawford said in response to questions about how the company was faring.

He also lamented that while there have been calls for a bailout plan for hotels, no similar action was specifically targeted to the suppliers of goods and services to the tourism industry.

Up to November 2017, Convenience Foods was getting a consistent supply of 500 cases of eggs per week from 30,000 layer birds. At the Corporate Area facility, the company processes 200 cases of pasteurised eggs weekly, with each case containing four one-gallon bottles of liquid eggs.

But he pulled back on that investment after American interests started a vigorous marketing campaign seeking to get a foothold in the local industry.

Crafton Holdings invested in the liquid egg market after Caribbean Producers Jamaica exited its joint-venture partnership with the Jamaica Egg Producers Association. The Montego Bay-based operation was said to have racked up heavy losses.