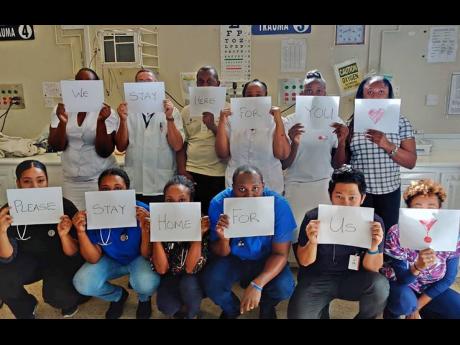 Referred to as Patient 5, the St Ann man who beat COVID-19 and was released from the St Ann’s Bay Regional Hospital on Sunday, after 16 days in isolation, is expressing thanks, while urging Jamaicans not to take the disease lightly.

In the meantime, acting Senior Medical Officer (SMO) at the hospital, Dr Derrick McDowell, has hailed the recovery of the patient as confirmation that the system in place at the hospital works.

“Mi give thanks, man, mi recover,” the man told The Gleaner in a telephone interview from his home.

The man said he works abroad and travelled from Portugal to Jamaica, via Miami, in early March and was diagnosed a week later.

“About one week after coming back, I went to the St Ann’s Bay Hospital just to check out because I heard about this symptom thing going around. I was having a little cough so I check out about the 10th of March,” he explained.

IN ISOLATION FOR 16 DAYS

“I was at home, two days after I got a call that I test positive for the coronavirus symptom. They told me to stay put, they will come pick me up. They pick me up, bring me to the St Ann’s Bay Hospital. I was in isolation for about 16 days.”

Patient 5 was not unduly worried while in isolation, he revealed.

“Before them check my kids and my babymother, I was worried, but when I heard that they were all right I was OK and was feeling relieved. Only them I was fretting about because me, within myself I wasn’t feeling nothing like sickness, no illness, only a little cough at the first,” he outlined, adding that he was categorised as asymptomatic.

Patient 5 was monitored as the days went by, with checks on his temperature, blood pressure, and so on, in addition to getting some cold medicine for his cough.

“I’m home from Sunday night. I’m feeling 100 per cent all right, man. Actually, I have this feeling from I just came, basically a normal feeling.”

The man said he was grateful for a lot of things, including the care he received at the hospital. His family is okay and he is fully recovered.

“Most of all mi give thanks seh it never worse, you know. Even though me never feel no symptoms nor nothing, them say me test positive so me can’t go round the law. It’s the law so I just run through the procedure and thing and the outcome was victory for me, so I give thanks.”

Patient 5 also took the time to offer some words of advice to his fellow Jamaicans.

“This disease is very dangerous so mi a beg everyone just stay safe and stay good, with good sanitation practice. Practise good hygiene and keep clean and follow the routine. And just trust inna di Lord. Mi neva did a show no symptoms, me asymptomatic but the biggest thing is, me overcome wha happen.”

Acting Senior Medical Officer at St Ann’s Bay Hospital Dr Derrick McDowell told The Gleaner Wednesday afternoon that the system put in place at the hospital to combat the coronavirus worked for the victim.

“This particular patient, the system worked for him. We got everybody in the various areas to do what they’re supposed to do, and as a result of the teamwork, we got it done. Everybody’s quite happy that he recovered because at some point we were worried about him in terms of how he was progressing,” McDowell said.

He indicated that other patients at the institution are doing well as the team carries out its functions.

“We’re doing the right thing, working together. We have daily meetings to ensure that we get things right and we’re about 70 to 75 per cent ready for what we’re doing and what is to come. Other patients are doing well and we’re happy as a unit and individually.”

“We’ve got everybody in their area of expertise to function so there’s no micromanaging. We have strong systems in place and the systems are working, (so) there’s no one individual bearing any stress.”

McDowell reiterated the Ministry of Health and Wellness’ directives to Jamaicans to help fight the disease, urging persons to observe social distancing, washing and sanitising their hands, and other measures.