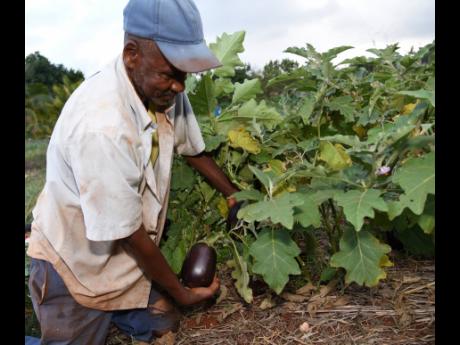 Ian Allen
Orette Belinfante, a farmer from Melksham in South East St Elizabeth, checks egg plants that are ready for reaping on his farm.

IN SOUTH east St Elizabeth, farmers in the communities of Red Bank, Port Sea, and Melksham are cultivating a wide range of vegetables – tomato, cucumber, cauliflower, melon, garden egg, scallion, broccoli, Scotch bonnet pepper and cabbage – like they have done for decades, and from which they have always been able to earn a decent living.

Now, however, the hard work put in by these small farmers is being undermined by a series of events which has them teetering on the brink of bankruptcy. The impact of the COVID-19 pandemic which has resulted in government restrictions on public gatherings to no more than 10 persons, an absence of a consistent supply of piped water, as well as the failure of some state agencies to deliver on basic services have the residents facing certain ruin.

Last Friday, a Gleaner news team spent a few hours walking the fields with some of these farmers, and today we highlight the Belinfantes – brother Orrette, 65-year-old sister Carol, and their younger sister, Sheila; as well as Elaine Simpson, her brother Linton, and daughter Shereen Bromfield.

Simpson has opted not to travel to the Coronation Market to sell and the closure of hotels and restaurant means there are no vendors to take up the vegetables which are rotting on the vine. In an effort to salvage something, she reaped some of the tomatoes, pooled them with her brother’s crop and stored them in his shop, hoping someone will come to buy.

As she picked tomatoes, throwing out some which were spoiled, the desperate woman tried to explain the daunting situation facing the entire South East Elizabeth farming community.

“Everything ripe up, dem a go spoil. Weh me a go do with them? Hungry a go kill we,” she said, talking to herself, really.

We caught up with Linton at his home, attempting to set up the water system for this one-acre plot of tomatoes ready for harvesting, intercropped with melons which are nearing maturity. His frustration was palpable.

“We want help from the Government because them haffi do sup’m fi us. Fi get this field to this stage where we start reap now and we nuh have no market. This garden run me over $400,000 already, just for water and seeds.”

According to Linton, the situation is due in part to the short-sightedness of both the ruling Jamaica Labour Party and the parliamentary Opposition People’s National Party, which have failed to act on the repeated incidents of gluts which have affected St Elizabeth over the years. He argued that they should have set up a company to take off excess produce, with cold-storage facilities to keep the surplus.

“We going to have a great shortage after this corona or whatever pass, we gonna need all this produce and they’re gonna stay in the field and spoil,” he opined.

Over at Sheila’s Belinfante home, a cauliflower crop was wilting because the area has been experiencing a severe drought, and with schools closed until after Easter, her teenage son is eating her out of house and home.

When she spoke to the 16-year old about his eating, he gave her this reminder: “‘Mammy, you a cook like when me deh a school’,” she said, explaining that he would usually be gone from morning, returning in time for dinner. Now she has to make adjustments around him.

“I have to do breakfast, I have to do lunch, and him snack in between; and come dinner time he is, of course, looking for something to eat again.”

For older sister Carol, the struggle is even harder. She showed a patch of 300 Scotch bonnet pepper plants which have begun bearing, but with no market on the horizon she is disheartened.

Her 38-year-old daughter is stricken with lupus and unable to work on a regular basis. Carol suffers from hypertension and diabetes and is a beneficiary of the Jamaica Drug for the Elderly Programme (JADEP), but her efforts to get on to the Programme of Advancement through Health and Education (PATH) have failed, for reasons she is unable to fathom.

“Me get help with the JADEP card but is $10,000 each month for my medication, and judge fi har (daughter’s) own. Them register me fi the PATH but I can’t get it. They come to assess me, but I can’t get it up to now,” she complained.

Her brother, Orrette, then offers his take on the reasons she might not be getting the financial aid so badly needed.

“The people that come to assess, if they see you in this house, them try to judge you off the house. If you have a television or a fridge, them judge you offa it.”

If correct, this assessment of the situation would particularly be unfair to the 65-year-old, who told The Gleaner she has been cooking with wood since her 30-pound gas cylinder ran out three weeks ago.

Our next stop was Orrette’s home, where he just put in some cauliflower seedlings, despite seeing his sisters’ crops going to waste .

With water coming to pipelines on the main road, the irregularity with which it is channelled to the side streets, such as where he lives, has forced residents to have to spend upwards of $17,000 for a load of water. But why bother to incur this growing expense with no market in sight?

Sheila explains: “You sow the seed with the intention that within two or three weeks you will get rain, and then you sow another set, still hoping that the rain will come. So if you lose one crop, you ketch the next one because if you sit back and just look, hungry kill you!”

Shereen Bromfield, Elaine’s daughter, is also caught in this catch-22 situation, with 1,000 holes of cauliflower intercropped with scallion for which she spends $1,500 for water every two days and can’t afford to stop spending on water, just in case a market opens up.

“She looking down the barrel of a gun,” was how one onlooker summed up the situation.