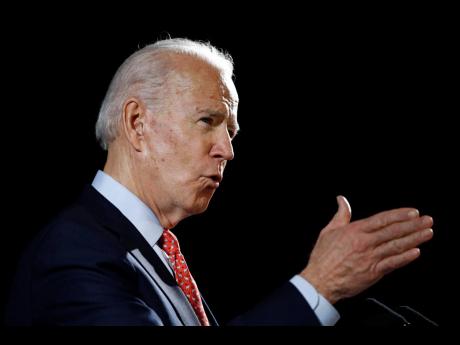 Presumptive Democratic nominee Joe Biden is joining a growing call for the release of comprehensive racial data on the coronavirus pandemic, which he says has put a spotlight on inequity and the impact of “structural racism".

Biden's Medium post on Thursday said he is joining Democratic congressional members Ayanna Pressley, Kamala Harris, Cory Booker, Elizabeth Warren and others who have also called for the Centers for Disease Control and Prevention and other agencies to release more data. Biden said he wants data released on income, too, to better help allocate resources to communities in need.

Biden acknowledged this is an “anxious, difficult time” for all Americans, but he noted the disparate impact on black Americans and Latinos, saying the virus can “hit anyone, anywhere,” but it doesn’t affect every “community equally”.

The former vice-president also noted a climbing number of infections and deaths among “Navajo Nation and fears about the disproportionate impact the virus could have on Indian Country".

“Unsurprisingly, it’s also amplifying the structural racism that is built into so much of our daily lives, our institutions, our laws, and our communities,” Biden wrote. “It’s unconscionable, and it shouldn’t be the case in the United States of America in the 21st century.”

The coronavirus pandemic has transformed the presidential race, forcing candidates to find innovative ways to reach voters and confront the rippling effects of the virus across the country.

After disappointing finishes in the first three voting states, Biden's campaign was reinvigorated with a victory in South Carolina, thanks largely to black voters, who also helped propel him through Super Tuesday and beyond. But the very voter base that helped cement Biden's front-runner status is now being hit particularly hard by the virus, which has ravaged black cities like Detroit, Chicago, New Orleans and Milwaukee.

An Associated Press analysis, which was based on data through April 8, found that black Americans are disproportionately being affected by COVID-19. Biden addressed the challenges in a virtual town hall Wednesday.

The AP analysis found that of the 3,300 COVID-19 victims whose demographic data were publicly shared by officials, about 42 per cent were black. Black people account for roughly 21 per cent of the total population in the areas covered by the analysis. At the time, there had been 13,000 deaths in the nation. The analysis was one of the first attempts to examine the racial disparities of COVID-19 cases and deaths nationwide.

It involved examining more than 4,450 deaths and 52,000 COVID-19 cases from across the country, relying on the handful of state and local governments that had released victims’ race. Since then, other states have also released data, but a majority of the data is still missing.

On Wednesday, the CDC released racial data for hospitalizations in 14 states in March that showed that one-third of patients were black. In the United States, black people make up about 13% of the total population.

Meanwhile, Trump has also acknowledged the virus’ impact on African Americans, saying Tuesday that his administration was trying to address what he termed a “tremendous challenge”.