With 20th baby on the way, ‘hustler’ begs Gov’t to soften stance on closures 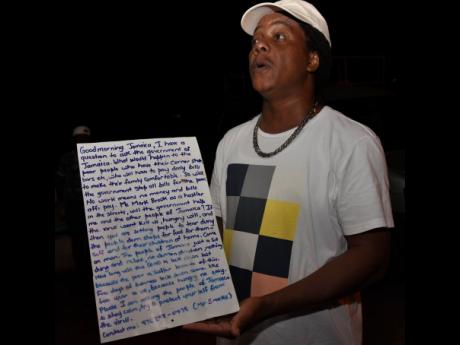 Ian Allen/Photographer
Mark Brooks, a self-proclaimed ‘hustler’ from St Elizabeth, displays a letter addressed to the prime minister about concerns over social and economic effects of a lockdown of the State.

The Government’s strategies for controlling the spread of the coronavirus is wreaking havoc with the operations of small businesses such as bars and restaurants, and Mark Brooks is adamant that they need to be revisited to allow for some amount of business to continue, even as he supports the efforts to curb the spread of the deadly virus.

A self-confessed hustler with 19 children among 13 women and a wife in an advanced state of pregnancy, Brooks told The Gleaner during a visit to Melksham, St Elizabeth, recently that his business operations had been particularly hard hit by recent changes announced by the Government.

Brooks operates a rented bar in the nearby Red Bank Square, which has been closed in keeping with the Government stipulations and has had to restrict his visits to the Charles Gordon Market in Montego Bay, St James, where he usually sells farm produce.

The decision to restrict the operations of municipal markets to 6:00 in the morning until 2:00 in the afternoon – with a 6 p.m. cut-off time on Thursdays, Fridays and Saturdays – is counterproductive, Brooks argues, since by the time he gathers a load of produce taken on credit and gets to the market, it is closing. He also questioned the strategy of state officials tasked with enforcing the law.

“In Montego Bay when they close at 2:00, you have the parish council a run you down, soldier and police a run you dung. Weh you a go get $1 million fi pay [fine for breaches] and the goods value $30,000?,” he reasoned.

“You say you want no more than 10 people fi gather up and inna the market but more than 60 police run you dung and about 30 soldiers inna one truck. So me nuh understand that because if me did open the bar and a sell two beer, me might get 30 customers for the entire day. Some days, me nuh make more than $300,” Brooks continued.

Despite this, he believes the sanitary measures being implemented across the length and breadth of Jamaica are long overdue.

“What the Government is telling us to do a suppen we should a do long time – proper hygiene, wash your hand and keep your areas clean with bleach and other things. So what I would ask the Government of Jamaica to do is to enforce proper hygiene in the small business places. If the bar is going to open, make sure proper hygiene measures are in place before customers enter. Don’t make more than three or four enter at a time, but still run you business. That way, at least we would know how to protect ourselves while we still have business going,” he suggested.

Brooks is convinced that if the Government were to soften its stance on the outright closure of bars and other businesses and allow for the monitoring which takes place in banks and supermarkets, the economic fallout would not be as harsh. He has put these and other recommendations in a letter, a copy of which he has sent to the authorities.