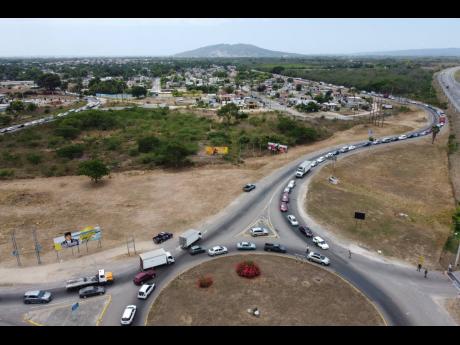 File
A heavily congested Municipal Boulevard in Portmore on Wednesday, April 15, the first day of the COVID-19 St Catherine lockdown implemented by the Government.

It’s been two years and a month since he assumed the office of minister of finance and the public service in Jamaica, but COVID-19 has put Dr Nigel Clarke in the illustrious company of economic wretchedness among finance ministers of the world.

When 46-year-old Clarke first sat inside his National Heroes Circle-based office on March 26, 2018, none more than he knew that he bore the weight of the country’s macroeconomic affairs on his shoulders. His charge was simple, yet complex, but undergirded by a fierce passion to drive policies to generate sustainable economic activities which would spread the nation’s wealth to a larger cross section of the population.

Clarke was no stranger to business and management at the highest levels in Jamaica.

With impressive academic achievements, his public life and career spanned management operations in the public and private sectors, including companies with international reach. He has served at the board level or as boss of several quasi government and public entities. When he was appointed senator in 2013, his tenure was short-lived, but his contributions to the Upper House drew respect from both sides.

When Holness tapped him to be the finance minister, he was duty-bound to become an elected representative by the Constitution. On March 18, 2018, he was elected member of parliament for St Andrew North West, paving the way for his appointment.

Twenty-five months later, the novel coronavirus which has been dealing a devastating blow to world economies is taking a swipe at Jamaica.

In an interview with The Sunday Gleaner last week, Clarke acknowledged that he is cognisant of the looming COVID-19 economic storm that could do serious damage to world economies, especially Jamaica’s, which has always been vulnerable to shocks.

However, he is remaining optimistic, stating that some local industries – established and emerging – always rise to the occasion. He is betting on Jamaicans to rally together and exceed perceived capabilities to put the country on firmer ground when the country begins to emerge from the pandemic.

“This is a tense and anxious time for thousands of Jamaicans worried about health, jobs, income, school, and more. Life’s regular rhythm has been severely interrupted. Social interaction, which is the foundation of emotional and psychological well-being, has been restricted. Economic bonds that provide peace of mind have been ruptured. This is a bizarre and surreal experience for all and an unsettling one for many,” the finance minister told The Sunday Gleaner last week.

Clarke is acutely aware of the vulnerabilities exposed by the virus, which, physically, in the worst cases, places a chokehold on the breathing capacity of individuals, sending them into respiratory distress, while metaphorically doing the same to the most vulnerable economics.

“The crisis highlights long-standing vulnerabilities, which, though reduced, still exist,” he pointed out. “The tenuous nature of informal employment is brutally exposed. The hazards of crowded living environments compound risks. Lack of access to the convenience of bank accounts and the Internet suppresses opportunities and outcomes.

“However, we are also a deeply resourceful and creative people. Achievement has regularly been nurtured by a single cow and half an acre and bread has risen from the dressmaker’s table for generations. As we have many times in the past, we will innovate, we will diversify, we will tun hand mek fashion. We will bounce back,” Clarke said firmly.

As he prepares to address Parliament this week, he expects the ministry to be asked for more money for the Government’s stimulus package, much more than the $10 billion already earmarked to assist the vulnerable. The Opposition is in the forefront asking that the sum be doubled.

“The sharp collapse in economic activity and the associated rise in unemployment on account of COVID-19 generate deep and intense feelings. … I feel an incredible sense of pain from the pending economic setbacks, in particular unemployment,” he said.

“The good news is that we entered this crisis with macroeconomic stability, which preserved some flexibility for a policy response, which has allowed us to implement the largest and broadest social intervention programme in Jamaica’s history,” he stated.