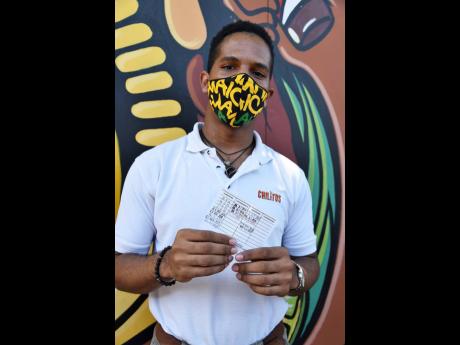 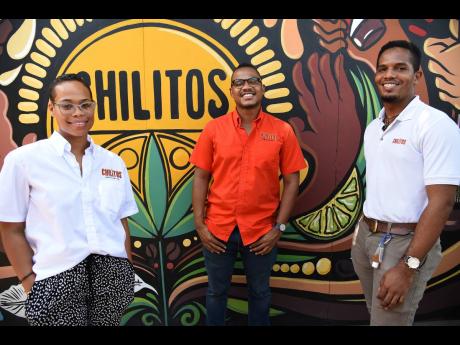 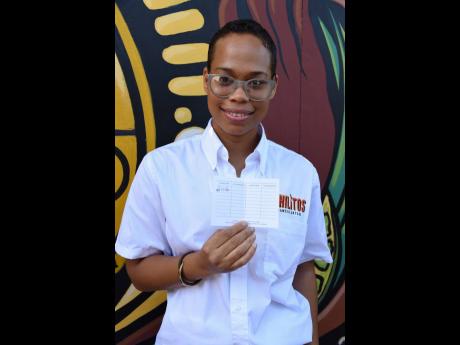 Ian Allen
Natalie Nash shows her blood donor card. The partnership with the Blood Bank came to fruition after Nash made a donation and noticed a small number of donors on site. 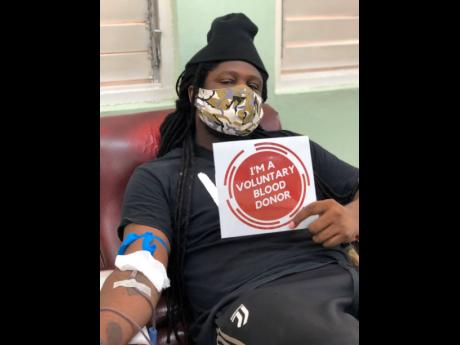 Contributed
Chilitos made contact with creative director and photographer Yannick Reid, who heeded the call and gave blood for the first time at the National Chest Hospital.
1
2
3
4

THE NEED for blood is urgent. That is the message from local Mexican-Jamaican eatery Chilitos JaMexican Food as they encourage patrons to donate blood. In exchange for their support, all who donate will receive a 30 per cent discount on anything purchased from the restaurant.

The aim: increase donations for the National Blood Transfusion Service (Blood Bank), which is facing a significant shortage, exacerbated by the coronavirus (COVID-19) pandemic.

“We really did this in light of the recent extreme deficit that the Blood Bank is facing, but as it has been very successful, we decided to offer this permanently because we want to continue the efforts. People need blood all year,” said Managing Director Christopher Boxe.

Jamaica recorded its first case of COVID-19 on March 10. And while COVID-19 is a respiratory virus, and there have been no suspected or reported cases of transfusion-transmitted COVID-19 to date, social-distancing protocols and other measures have resulted in the cancellation of blood drives and the slowing of regular donations.

Staff members of Chilitos have had a long relationship with the Blood Bank through regular donations. It was through one such instance that the current need was ascertained and the current partnership formed.

“I’ve become a regular donor since a friend of mine needed blood. I was due for donation around March, and when I went in, there was basically nobody there. As I was talking to the team, they were telling me that their donations have almost become non-existent because of it. At the time, we [Chilitos] were looking for ways to give back to the community, and I thought this is the perfect way to do it,” said Natalie Nash, chief brand officer at Chilitos.

Since its announcement, the promotion has helped to raise awareness and garner much-needed donations.

“The response from the public has been positive and encouraging! The Blood Bank reported on Saturday, April 25, that 51 persons had come in to donate, the most they have ever reported at the National Chest Hospital,” said Nash.

One first-time donor who heeded the call was creative director and photographer Yannick Reid.

The content creator touted the benefits of his experience on Twitter, highlighting the ease with which he gave blood and the sanitisation and social-distancing protocols he observed while donating. Now, he is committed to donating every chance he gets.

“Just to know that 30 minutes of my time can really make a difference in somebody’s life, at no additional cost to me, I am definitely really interested to go back as many times as possible,” shared Reid.

Similarly, inventory and purchasing manager Kevaughn Prout is devoted to the cause.

“Growing up, my mother always told me stories of her losing a lot of blood giving birth to me as well as I also worked with the Blood Bank three years ago at the Cornwall Regional Hospital in St James, so working around the phlebotomists and all those professionals really opened my eyes to the world of giving blood and how important it is that one pint of blood can save up to three lives,” said Prout.

Prout, who is a regular donor, coincidentally, met the team at a blood bank while they were securing donations for a friend in need.

“I call this story my serendipity story because in July of last year, I went to give blood, just voluntarily, and I gave and was sitting, resting with a friend of mine from my Rotaract Club, and in comes a group of people and everybody’s frantic,” shared Prout. “I overheard a gentleman saying they need blood for their friend who needs to do surgery who is in the hospital and I just had the idea, ‘Hey! Let me just give him my receipts’.”

He did give his receipts, coming to the aid of a person he had never met.

And now Prout, like many others, is answering a new call to donate.

WHERE TO DONATE BLOOD