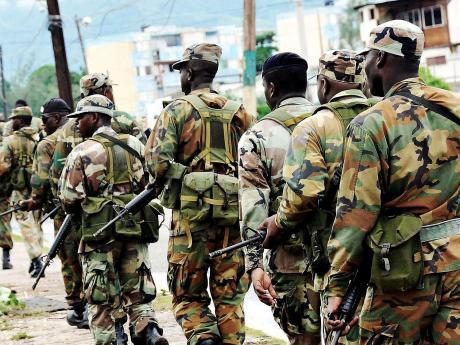 News of the allegations came in an army statement in which the JDF said it was also investigating the case in which a group of soldiers allegedly attacked a schoolboy in Majesty Gardens, St Andrew on April 26 resulting in the teen hospitalised with a broken right leg.

The JDF says it has “consistently asserted the unequivocal unacceptability of members of the force misusing their authority by subjecting any member of the population to any form of abuse.”

“We commit to ensuring that strong corrective measures are applied in any case where soldiers are found to perpetrate, facilitate, allow or fail to report acts of abuse,” it added.

The JDF’s interaction with citizens came under the microscope with the April incident in which a footballer was reportedly stopped by soldiers on his way to get dinner for his grandmother.

Relatives alleged that shortly after being stopped, the boy was chased by the soldiers, one of whom allegedly kicked him, breaking his leg.

He was hospitalised for several days.

The timing of the incident is not clear although the Independent Commission of Investigation, which is probing the matter, said it “occurred in the late afternoon to evening of Sunday.”

Multiple videos have emerged showing the wailing boy on the ground surrounded by soldiers with their weapons.