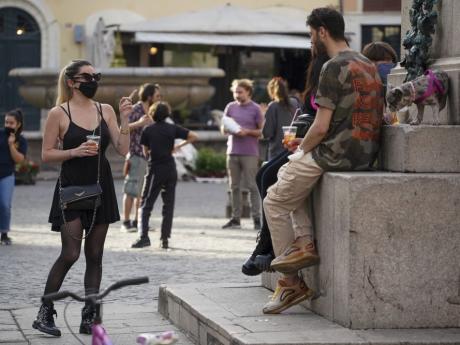 People enjoy a drink in Rome's fashionable Campo De' Fiori Square on Friday, as the city is slowly returning to life after the long shutdown due to the COVID-19 outbreak (AP Photo/Andrew Medichini).

(AP): South Korea’s capital, Seoul, has closed down more than 2,000 bars and other nightspots because of a new cluster of COVID-19 infections; Germany scrambled to contain fresh outbreaks at slaughterhouses; and Italian authorities are worried that people are getting too friendly at cocktail hour during the country’s first weekend of eased restrictions.

The new flare ups, and fears of a second wave of contagion, have underscored the dilemma authorities face, as they try to reopen their economies.

Around the world, the US and other hard-hit countries are wrestling with how to ease curbs on business and public activity without causing the virus to come surging back.

In New York, the deadliest hot spot in the US, Gov Andrew Cuomo extended his state’s stay-at-home restrictions to June 7, but said some regions will be able to start opening up sooner if they show progress in taming and tracking the scourge.

Cuomo also said three children in the state died from a possible complication of COVID-19, involving swollen blood vessels and heart problems. At least 73 children in New York have been diagnosed with symptoms similar to Kawasaki disease — a rare inflammatory condition — and toxic shock syndrome. But there is no proof the mysterious syndrome is caused by the virus.

Elsewhere, Belarus, which has not locked down despite increasing case numbers, saw tens of thousands of people turn out to mark Victory Day, the anniversary of Nazi Germany’s defeat in 1945. That was in contrast to Russia, which skipped the usual grand military parade in Red Square.

Worldwide, 4 million people have been confirmed infected by the virus, and more than 275,000 have died, including more than 78,000 in the US, according to a tally kept by Johns Hopkins University. Spain, France, Italy and Britain have reported around 26,000 to 32,000 deaths each.

Germany and South Korea have both carried out extensive testing and contact tracing and have been hailed for avoiding the mass deaths that have overwhelmed other countries. However, even there, authorities have struggled to find the balance between saving lives and salvaging jobs.