Security beefed up after robbery of care packages in St Mary 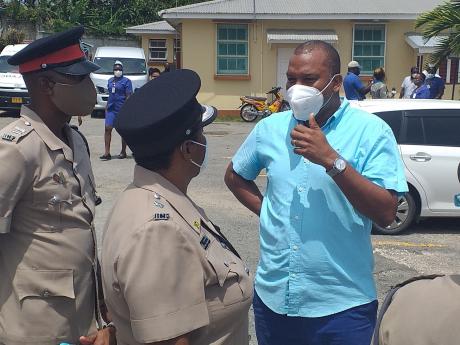 Mayor of Port Maria, Richard Creary (centre), speaking with members of the police force in Annotto Bay on May 11, 2020 - Gareth Davis Sr photo

Security has been beefed up for social workers attached to the Ministry of Labour and Social Security after personnel came under attack and were robbed of care packages on Saturday in Enfield, St Mary.

Sections of the parish have been under a 14-day quarantine since last week Thursday.

The Ministry’s permanent secretary, Colette Roberts Risden, says she was surprised by the brazen attack, noting that residents have always been receptive to government workers in their communities.

She indicated that the incident happened as a ministry vehicle transporting care packages for distribution came under attack, resulting in four parcels being stolen.

“There was an altercation with the driver and one of the, should I say, robbers. But, the driver was not injured. Since the incident, and just to ensure the welfare of the staff, we have been working a lot closer with the JDF (Jamaica Defence Force) and the police to accompany us during the distribution exercises. I am told when you look at the stats, there has been an increase in crime in St Mary.

“The history normally shows us that whenever the ministry goes into an area, the residents, you know crime or no crime, are usually quite respectful and lookout for our officers. So you have communities that the ordinary man wouldn’t necessarily go, but our officers feel quite safe going there,” said Roberts Risden, who noted that the workers were left shaken up by the incident.

The incident has been condemned by Member of Parliament for South East St Mary, Dr Norman Dunn, and Mayor of Port Maria, Richard Creary.

“They (MLSS) are there with one single purpose in mind, to ensure that all the persons in the quarantine zone are, in fact, served and given some benefit as indicated by the state. This is not something to be tolerated and I would like the entire community to speak in one voice that this type of behaviour is not typical of the good people of the community,” said Dunn.

“They have always been gracious in accepting visitors and have always treated visitors with a sense of pride, respect, and decency. I would like to say that this is not typical of the people of this community, and by extension, anywhere else in South East St Mary. We are a proud people, we are decent people, and we are a law-abiding people,” he continued.

Meanwhile, Creary said the behaviour was unacceptable and served to disenfranchise those who are in need.

“It’s really an act of selfishness on the part of those residents,” he said.

“Everybody will get and they only have to wait their turn. We have taken the necessary steps to prevent that from happening again. I am almost sure that those who did it are not the ones who are in greater need. It is just an act of indiscipline,” Creary added.