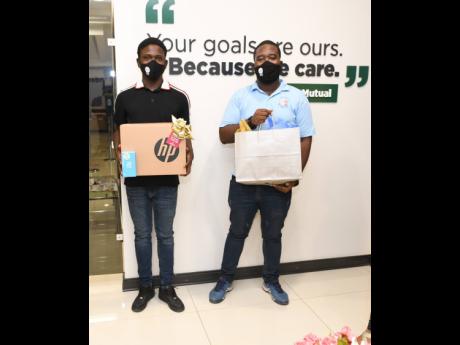 Contributed
Javanah Brooks (left) with his new laptop and smartphone received from the Victoria Mutual Group under its ‘Labour for Learning’ Labour Day initiative. With Brooks is Orane Shaw, his physics teacher at St George’s College in Kingston. Brooks was presented with the gifts last Saturday at the VMBS Half-Way Tree branch.

WHEN SCHOOLS were closed and classes moved online in March as part of the efforts to contain the spread of COVID-19, many students faced a major challenge because of a lack of resources. Among the hardest hit were students preparing for the Caribbean Secondary Education Certificate (CSEC) exams.

Without laptops, cell phones and data service, many of these promising students faced an uphill climb to successfully sit this critical exam. The Victoria Mutual Group (VM) decided to step in, in a big way.

VM’s 2020 Labour Day project, dubbed ‘Labour for Learning’, saw the organisation donating digital education kits to 21 students across the island. The kits include a laptop equipped with Microsoft Office Suite, and a smartphone with a three-month data plan, providing a significant boost to students who had been struggling to keep up with their peers who already had the tools to transition seamlessly to online classes.

When approached by VM, Courts Jamaica and FLOW immediately bought into the idea and provided the items in the kit to VM at a reduced cost.

VM Group’s Assistant Vice-President for Corporate Affairs and Communications, Clover Moore, said that VM’s Labour for Learning initiative is in keeping with the financial group’s focus on inclusion.

Among the recipients of VM’s digital education kits was 17-year-old Javanah Brooks, a fifth-form student of St George’s College in Kingston. Brooks lives in the tough inner-city community of Arnett Gardens and is subject to the many well-known challenges and temptations of living in a gritty Kingston community. His father passed away when he was only a year old, leaving a significant gap in his life. However, with support from his older brother, his mother and teachers, Brooks is excelling in school and will be sitting eight CSEC exams in July.

When Brooks visited VM’s Half-Way Tree branch on Saturday, May 23, he was in for a big surprise. When asked by Branch Manager Allison Morgan how he was managing preparations for his impending exams, Brooks bit his bottom lip and explained that he was struggling, as classes have been taking place via Zoom, the online meeting platform. “But I don’t have a laptop or a smartphone, so I can’t join the Zoom classes. This is a challenge for me, because interaction helps me to learn better,” he said.

Unable to attend classes, Brooks routinely calls his teachers and classmates at night to talk about lessons that were taught in the online classes. “My teachers are always there for me and they help me to keep up as much as possible.”

Brooks was overcome when Morgan revealed that he would be receiving a VM digital education kit, providing him with the access he yearned for and enabling him to stay on top of his lessons as the CSEC exams draw near.