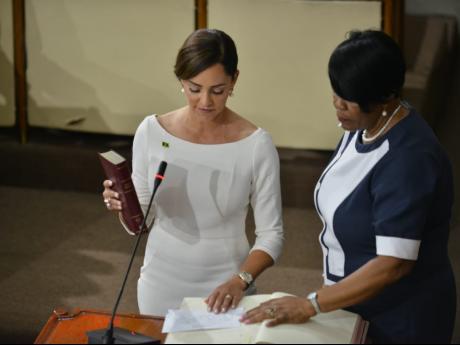 Ann-Marie Vaz being sworn in as Member of Parliament for Eastern Portland at Gordon House in April last year.

Reflecting on her victory over People's National Party (PNP) candidate Damion Crawford in a hotly contested by-election for the constituency of East Portland, Member of Parliament Ann-Marie Vaz has listed road rehabilitation and improved access to some basic amenities as her main success so far.

In an interview with The Gleaner on Friday, Vaz alleged that roads in the constituency had suffered damage due to years of neglect.  She argued that unless amenities, such as road, water, and electricity, are addressed quickly, then her tenure as MP would be deemed a failure.

"When I took the decision to enter representational politics, I was well aware of the challenges faced by the people of this constituency, "she said.

"Roads were in a deplorable state and the people had very little access to potable water in some communities. Also, access to electricity was a privilege for some. Undoubtedly I am equal to the task, despite the challenges brought about by COVID-19," she continued.

She said several roads, which posed a challenge for commuters, have now been rehabilitated.

"And water, potable water has been provided to several communities. Residents, who never had piped water before, now have full access," she added.

According to the first term MP, the cries from constituents were mainly for road, water, and access to electricity, which she noted are important to the growth and development of any community.

Vaz said access to education is also high on her list, pointing out that it is the only way to alleviate poverty in the rural parish.

She said the attention given to early childhood institutions in the parish was not by chance, as the necessary resources were provided to ensure that schools were certified in keeping with the standards outlined by the Early Childhood Commission.

"It is absolutely necessary to ensure that children get an opportunity to learn in school at a tender age. It has been proven scientifically that children [are] better exposed to learning new things at a young age," she said.

"As such special emphasis has been placed on Early Childhood development, so that by the time the child reaches primary school the brain would have [adapted] and is eager and prepared for higher learning, " Vaz argued.

Vaz was sworn in as MP in April last year after wrestling the seat from the PNP, which had, up to that point, won the seat in every election since 1989.

Among the roads she has listed as rehabilitating are: the road through the Anchovy Housing Scheme; the entrance to the Portland Parish Library; approximately 600 metres of road leading to Goblin Hill Villa; the roadway to the Drapers Fishing Beach; the roadway leading to Geejam studios and hotel, and parts of Spring Bank Road.

Several other roads are approved to undergo major rehabilitation. These include the roadway from Fellowship to Grant's Level; Grant's Level to Berrydale; Seamans Valley to Alligator Church Bridge; Norwich Heights; Chilly Lane; and the third phase of the Anchovy land settlement to John's Town project.