BRIGADE ON FIRE - 14 officers drag Gov’t to court after JFB board rescinds promotions, claiming they were appointed illegally 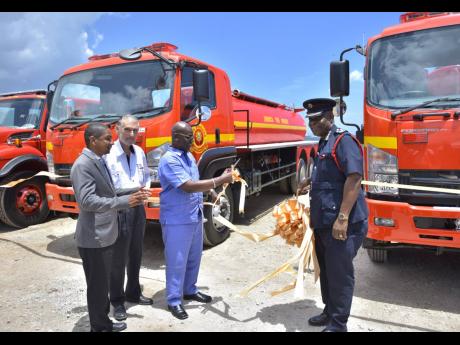 Fourteen firefighters on the cusp of major career moves in April 2018 following news of their promotion had their celebrations cut short as three days after the announcement, the decisions were rescinded by a board, which claimed that the then fire chief had gone off on a frolic of his own.

It is the latest development in a series of questions that have been raised over the past two years about the promotion practice of the Jamaica Fire Brigade (JFB) and its board.

Now on the hunt for ‘justice’, the employees have sought a judicial review in the Supreme Court, aiming to overturn the decision of the Russell Hadeed-led board. JFB Commissioner Stewart Beckford and the attorney general have been named as defendants in the case.

Some of the affected firefighters had made arrangements to buy paraphernalia to reflect their new status while others even started to wear the new ranks on their uniform, District Officer Lloyd Johnson said in his affidavit. He is representing 13 others who have not been formally identified.

Johnson was promoted to assistant superintendent – watch commander in the Portland Division.

It is a case that is likely to test the extent to which the board can intervene in the operations of a perceived quasi-military body, whether the board can be viewed as part of the chain of command, and whether a promotion could be considered an appointment.

The court has been told that on April 6, 2018, then JFB Commissioner Raymond Spencer allegedly issued General Order No. 3/2018, announcing that the board approved the promotion of the group of 14, among others, to positions such as assistant commissioner and assistant superintendent deputy superintendent.

But within 72 hours, Chairman Hadeed, having got wind of the development, issued another order, No. 4/2018, withdrawing the promotions relating to the 14 employees, pending a review.

The outcome of that review has not been shared with the staff, The Sunday Gleaner understands, and Hadeed directed our queries to government lawyers.

Our news team has also seen a June 28, 2019, document showing that some of the affected employees, who were later given acting positions, were removed from their posts and transferred.

Now stripped of their new ranks, the group of 14, led by Johnson, is claiming that Hadeed overstepped his authority as a chairman neither has the power to “bypass” the commissioner and issue general orders nor to revoke promotions made by a commissioner.

A meeting was held on April 19 last year between Myers, Fletcher & Gordon – the law firm representing the aggrieved employees – and the JFB commissioner and ministry officials and their lawyers to attempt to put out the flames. That meeting yielded little success as Beckford reportedly insisted that persons who had recommendations for promotion sent to the board were later elevated, and those without recommendations were not promoted, including those now suing.

In his affidavit filed in the Supreme Court in February this year, Beckford stated that a commissioner is “not empowered to appoint or promote individual members without the approval of the board”. He said, too, that from his review of the files, there was no evidence of any application for the posts to which Johnson and his colleagues were initially promoted and neither were any of them successful in promotional exams.

The former commissioner demonstrated “blatant disregard” and engaged in a “clear breach” of the procedures and regulations, Beckford said, by inserting the names in the General Order No. 03/2018. Spencer, who retired in June 2018, said he would not speak while the matter is before the courts.

Johnson, meanwhile, insists that the order is legal and has disclosed that his lawyers are yet to receive the terms and conditions which Beckford suggested the board used to determine promotions announced in the order under question. A request for the minutes of the board meetings has also reportedly not been honoured.

But Chairman Hadeed has fired back, claiming that Section 8A of the Fire Brigade Act empowers the board to appoint and employ brigade members.

The regulations governing the fire brigade outline that the commissioner “shall make” recommendations to the board regarding promotions, appointments, and confirmations.

“This means that promotions are only effected on the approval of the board having considered the commissioner’s recommendations, which are submitted by way of formal submissions,” Hadeed said in his affidavit.

Based on his understanding, he added, a general order does not promote members of the brigade but is “merely an instrument through which the commissioner communicates”.

Under the fire brigade law, the commission has “sole operational” command, and the regulations later define ‘operational directives’ as “orders, directions, or rules as the commissioner may make for the administration of the brigade.”

Hadeed further explained in his affidavit that he issued the order after Spencer refused “without explanation” to do a retraction as directed by the board, which was “surprised” that the initial order “included the names of officers that were not part of any board submissions”.

“The board issued General Order No. 04/2018 in an attempt to remedy the illegal act of the then commissioner … to ensure the proper functioning of the brigade.”

The matter was first mentioned in the Supreme Court on January 29 when Justice Sonia Betram-Linton set a trial date for October 8 this year. A pre-trial meeting is due on October 1.

Attorneys Gavin Goffe and Jahmar Clarke are representing the firefighters in the case.

In March 2019, the board was forced to issue a statement defending its promotion practices after a senior human resource official alleged favouritism, nepotism, and multiple breaches of public-service hiring guidelines.

The Jamaica Fire Brigade board said that it was committed to restructuring the organisational development of the entity and that it had submitted a report to the Ministry of Local Government for review.