Soldiers on operation during which Bogle was killed, reassigned; weapons confiscated 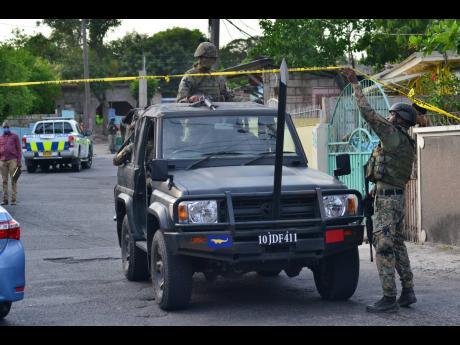 Soldiers leave the scene in August Town, where a disabled woman, Susan Bogle, was shot and killed during a police-military operation last Wednesday.

Civil/military cooperation and media officer for the Jamaica Defence Force (JDF), Major Basil Jarrett, says the JDF members who were present during the joint police-military operation in August Town, St Andrew when Susan Bogle, a disabled woman, was shot and killed last week, have been reassigned to non-operational duties. Their weapons have also been taken for ballistics testing.

It is alleged that soldiers had chased someone into the yard of Bogle's home and shot the 44-year-old woman multiple times, while she was in bed.

“The Force is cooperating fully with the Independent Commission of Investigations (INDECOM) and await the outcome of it's independent investigation," Jarrett said in a release.

He continued: "Four of the soldiers involved in the incident were interviewed by INDECOM on Friday, May 29, in keeping with the requirements of Section 21 of the INDECOM Act and the weapons of all JDF members who were present at the time of the incident have been confiscated/taken for ballistic testing. The JDF notes that the statements of all the soldiers who were involved in the operation were submitted to INDECOM and these members will be reassigned to non-operational duties until an independent investigation is complete."

Speaking to The Gleaner, Bogle’s son, Omari Stephens, who has been advocating for justice on various social media platforms, says his only goal is to get the matter dealt with fairly and for the soldier who shot his mother, to face the full extent of the law.

He said he received a call Prime Minister Andrew Holness called him this morning, and was reassured by the prime minister him that the government will be doing everything in its power to ensure that the matter is resolved fairly.

“It can’t be because of your address you’re a constant target; because of where you live you have no right; your constitutional rights are constantly being breached. Those are the stuff that I am for, justice in the sense that the person who did this to my mom get the full force of justice. In my opinion he acted just like a criminal and he should be dealt with as such. The prime minister called and he said he is on it and he has reached out to the relevant authorities and reassured my family that he is there to support and we can reach out to him, I am really encouraged that he personally called,” Stephens said.

Yesterday evening, a group, which identified itself as 'Concerned Citizens' started a petition on change.org, seeking a speedy investigation into the incident and the intervention of the Prime Minister, Director of Public Prosecution and Minister of National Security.

In a release this afternoon, the Independent Commission of Investigations pleaded for patience and understanding, noting that it will be conducting a thorough investigation of the incident. However, it acknowledged some challenges, as the members of the security forces on operation were not wearing body cameras. Still, INDECOM says it will rely on eye witnesses, post-mortem examination and report, ballistic report and forensic reconstruction for an independent account of the incident.

During a walk through of Bogle’s home today by Minister of National Security Dr Horace Chang and Member of Parliament for St Andrew Eastern Fayval Williams, Chang said with the level of violence in August Town, it can be understood what transpired resulting in the death of the woman.

“In the last few weeks August Town has seen a resurfacing of major violence and I want the community to appreciate that we are not only concerned about the tragedy of Miss Bogle but we are deeply concerned about the continued level of violence, which has taken since this year, nine lives," said Chang.

“The wider issue of concern is that this happened not in an ISIS area, where the soldiers come in and start acting, the level of violence in August Town unfortunately creates the system where this can happen. Right after this I am going to visit the family where three people were shot and this by criminals in the community so when the security forces have to operate with the gunfire around them, it creates a very difficult situation for them to operate in, this can never be justified but it can be understood what is happening here,” Chang stated.

The JDF is encouraging persons who may have information concerning this incident to contact INDECOM, the Jamaica Constabulary Force or the JDF at its Tip Line 876 837-8888.